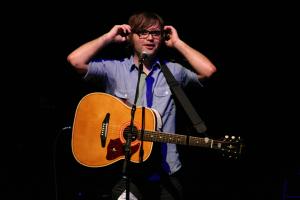 After 15 years writing for with Death Cab, he has acquired 12 songs that didn’t fit with the reverb heavy sorrow that Death Cab songs so often have.

He kept these songs tucked away until last October when he released his first solo album, “Former Lives.”

“Former Lives” had been written over the last eight years of Ben’s life.

During this time he saw three relationships including a divorce with Zooey Deschanel, moved to new locations twice and give up on drinking.

These moments are the fountain of “Former Lives.”

At first, I was a little unsure about the album. I had a hard time separating Ben’s voice from the musical elements of Death Cab. This album has a stripped down feel with much shorter songs. The album has a much happier sound overall. It offers a mix of acoustically strong songs as well as electric tracks with many complex layers.

My favorite track on this album is “Bigger Than Love.” This track blends Ben’s voice with singer-songwriter’s Amiee Mann. “Duncan, Where Have You Gone” offers a little variety to the album with warm over-reverberated vocal harmonies supported by soulful instruments. Another shock to this song was the guitar solo. It is a rare oddity in any song Ben writes to have a guitar solo, and even though it is short, it is wonderfully warm and feels very natural for this song.

The last track on the album, “I’m Building a Fire,” is exactly why I love Ben. He has the ability to write beautiful lyrics that are also very somber. He sings over a hollow guitar “I’m building a fire / to keep you warm / long after I retire / ‘Cause this body is / bound to expire tonight, tonight.”

If you like Death Cab or just want a good album full of every emotion, check out this album. Who knows, Ben’s lyrics may even help to heal some of your “Former Lives.”