Faculty recital a display of talent 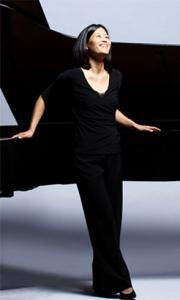 Mercyhurst students and the Erie community were given a great treat last Thursday, Jan. 17, as piano professor Shirley Yoo, Ph.D., gave a recital on the stage of Walker Recital Hall in the Audrey Hirt Academic Center.

Buck is an active performer, pedagogue and chamber musician who started out his impressive career as a musician at a debut performance at Carnegie Hall in 2006.

He is now employed by the State University of New York Purchase and Hoff-Barthelson Music School in Scarsdale, N.Y. and has obtained his Doctorate of Music Arts degree from Yale University School of Music.

Yoo and Buck showed incredible versatility by starting out the performance playing on two grand pianos that were facing each other.

As the concert progressed, the two musicians then moved to repertoire that required “four-handed piano,” which means that they were using the same piano. This often meant that Yoo and Buck were reaching over, around and across the other player, which not only is incredibly difficult, but gave the performance that extra “wow” factor as well.

The recital consisted primarily of Brahms pieces arranged for both two pianos and four hands. They selected Variations on a Theme by J. Haydn, op. 56b to begin the recital.

The pianos were set up next facing each other, perpendicular to the audience, with Yoo on the left side and Buck on the right. They proceeded to play two movements from Oliver Messiaen’s Visions de l’ Amen.

The next three pieces were arranged for four hands. Brahms’ Sixteen Waltzes, op. 39, selections from Játékok and Brahms Hungarian Dances Book 1, Wo01 nos. 2-5 composed the second half of the recital.

One of the movements from Játékok, titled “Hand in Hand,” was definitely one of the most interesting pieces of the evening. In order to play the piece, Yoo and Buck were required to play with their hands overlapping.

The performance was much anticipated by the D’Angelo Department of Music. Yoo and Buck displayed a fantastic skill set for the students, showing not only phenomenal mastery over their art, but also exemplifying that music can be fun as well.