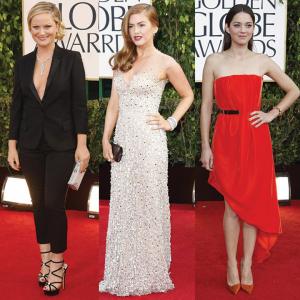 While most were tuned in to the Golden Globes to see the winning actors and actresses in movies and television, it was also a night of glamour and fashion.

The popular colors seen on the red carpet this season were dark reds, classic blacks and blush tone nudes. Some stars shined while others did not.

There was a lot of controversy going on involving actresses, such as winner Jennifer Lawrence in Dior Couture, Jessica Chastain in Calvin Klein and Kerry Washington in Miu Miu. While fashion critics seemed to favor Lawrence and Chastain and oppose Washington’s sheer gown, viewers seemed to be the opposite.

Popular favorites consisted of winner Anne Hathaway in Chanel, Emily Blunt in Michael Kors and Nicole Kidman in Alexander McQueen. These three looks succeeded because the outfits were flattering to their bodies and were age appropriate.

Anne Hathaway lit up the red carpet in her white gown with her new short hair cut, and Emily Blunt added a contrasting color of pink with her golden glitzy cut out dress. Nicole Kidman’s black McQueen dress, a very popular color, was original and unique with the boning cut out on her ribs, and gold accents on the top.

Some other worst dressed outfits consisted of Halle Berry in Versace, Lucy Lu in Carolina Herrera, Eva Longoria in Pucci and Amanda Seyfried in Givenchy.

Stars that didn’t get the recognition they deserved were stunners Jennifer Garner in Vivienne Westwood, Naomi Watts in Zac Posen and newcomer Olivia Munn in Armani.

Since the dark red, classic blacks and nude tone colors were the most popular here are the best dressed in each of those categories: In black, Amy Poehler, actually wore a very chic suit made by Stella McCartney.

Best red, Marion Cotillard in an asymmetrical and modern dress in Raf Simmons for Dior.

Isla Fisher was the winner wore the best blush colored dress of the night in Reem Acra.

Overall, most fashion that hit the red carpet was more successful than expected.