Has the thought of traveling to the Caribbean ever crossed your mind?

“I teach a course on Latin American politics and wanted to add a travel component to the course since it would allow students an experiential learning opportunity,” said Duncan.

“I spoke with Dr. Black who was fascinated by the region because of the political and social differences which appealed to her from a sociological perspective. We felt the FSAT course was a good opportunity for students to expand their worldview and examine a region so close to our borders but yet has distinct experiences from the U.S.,” Duncan said. 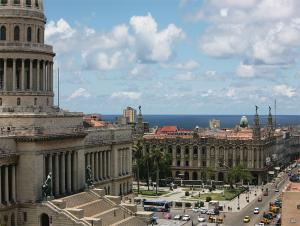 “We wanted to a unique FSAT class that would explore the political and social environment of the Caribbean region,” Black said.

The professors were not initially focused on traveling to only Cuba, but also to Trinidad and Tobago. The two destinations would have allowed for students to experience and study the diverse political and social arrangements within the Caribbean region. The cost of visiting the two locations did not permit, however.

They chose Cuba instead of Trinidad and Tobago because of the degree of contrasts it affords and the allure it has because of its strained relationship with the United States.

“For me, I wanted to expose students to a different political system from which they are familiar in the United States,” said Duncan. “Also, I think studying and visiting Cuba will demystify U.S.-Cuban relations.”

Students will explore Havana and Old Havana, but as noted in the itinerary, the group will travel the length of Cuba from Havana to Santiago and experience the diversity within the society of this island country.

“We have had interest by over a dozen students, but only a few firm commitments,” said Duncan. “We need at least 10 students confirmed for the course and travel experience to make this trip a reality. We aren’t there just yet.”

There will be lectures on topics such as race in Cuba, the recent changes in the Cuban economy and society since the recent economic reforms made under Raul Castro’s administration. Students will visit the site to observe and learn about how social problems such as poverty, child welfare and healthcare are managed. Trips will be made to the national monuments significant in the 1959 revolution as well.

“Most importantly,” noted both Duncan and Black, “students will have the opportunity to interact with Cubans and Cuban society and learn firsthand about politics and life under a communist regime. As with any travel outside of one’s home, students will have a cultural experience.”

The professors have preliminary details in hand (course ideas, reading material, connections with Common Ground Travel, etc) and an informational meeting will be Wednesday, Jan. 23, at 4:30 p.m. in Old Main 211.