Men’s basketball senior Luis Leao is having a tremendous 2012-2013 season.
He is averaging 20.2 points a game and grabbing an average of 6.8 rebounds. Being his senior year, all of his hard work since he started at the ‘Hurst is paying off.

Saturday, Jan. 12, Leao and the Lakers traveled to Cheyney for a PSAC showdown.

Leo was closing in on the 1,000 point mark going into the game. He successfully reached the milestone and finished the game with 24 points and six rebounds.
“There are a select few that have done it for Mercyhurst and I’m proud to be a part of it,” said Leao.

Leao could not have done it without his teammates and credits those who helped him to get these points.

“Even though it is an individual accomplishment, I could not have done it without my teammates,” said Leao. 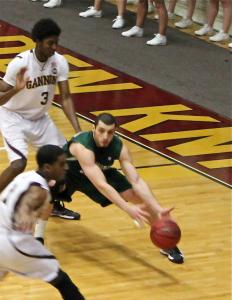 Luis Leao catches a pass beneath the net against Gannon on Jan. 23.: Brian Vail photo
The team learned that they must play a full 40 minutes to finish out their opponents.

“You need to play an entire 40 minutes of good basketball to beat the good teams,” Leao said.

This can help strengthen the team for the end of the season push. Learning to finish out a game is key to winning close games and having the mental toughness to focus.

The Lakers will be back in action Wednesday, Jan. 30, against Edinboro University. Tip-off is scheduled for 7:30 p.m. at the Mercyhurst Athletic Center .