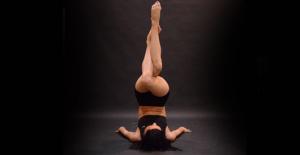 Contributed photo: Students and alum Meredith Lyons will join for a collaborative effort on the PAC stage for this year’s Raw Edges concert.

These students have more to worry about than just the pieces on stage.

“I needed to find proper music, scenery, and costumes,” said Welsh. “And I had to completely create the story on a large group of 18 dancers.”
The performances at “Raw Edges” this year all bring to light the creativity of the choreographers.

Welsh’s piece titled “The Snow Maiden” is a Russian story ballet based on the Russian folk tale. This piece is livelier, while others have a darker edge to them.

“My piece is very happy, comical and upbeat compared to the other pieces by the Student choreographers this year,” Welsh said.

Allergra Glinsky’s piece, “Breaking Point,” is based on someone’s personal struggle with conforming to society and being an individual.

“[It] is centered around the idea of the individual versus the mob. It deals with the ego and a person’s struggle to maintain individuality under pressure to conform,” Glinsky said.

The audience will be able to understand Glinsky’s concept through costume design with the usage of masks. Glinsky also mentions that the solo pieces in “Breaking Point” “represent the archetypical personality traits known in psychology by the acronym O.C.E.A.N (Openness, Conscientiousness, Extroversion, Agreeableness, Neuroticism). It is believed that every person has a mixture of these qualities.”

The next dance selection was choreographed by Tess Sinke. Her piece is based off of the Edgar Allen Poe poem, “The Raven.” Music is incorporated to verses being read from the poem, thus, making the scene more realistic. With this addition to the music, it helps the audience know exactly what is happening during the performance. Costumes are used to create the raven, the speaker and Lenore.

The movements by the “ravens” are pulsating and rhythmic so spectators will know not only by costumes that they are symbolizing ravens. Jessica Stachelrodt’s “Fatalis Feminam” is a performance that is about women being strong on their own. A duet between a woman and man dancer shows through its choreography the struggles between the two of them.
The group portions use movements that also relate to a struggle of standing alone. The intricate arrangements between the dancers help audience members realize the meaning behind this piece.

Finally the routine ends with a solo which has yet to be performed, therefore leaving a surprise for viewers. Two other routines are choreographed by the guest performers Neta Pulvermacher and Mercyhurst alumna, Meredith Lyons.

Meredith Lyons graduated from Mercyhurst in 2003. Since graduating Lyons has earned her MFA at Smith College in Northampton, Mass., and is currently performs with modern dance companies in Philadelphia. Lyons’ dance selection “A Life Less Backwards” uses video footage to enhance the meaning of the choreography. Words from dancer’s diaries are flashed across a screen adding emphasis to the movements on stage.

The last performance is choreographed by guest Neta Pulvermacher.

Pulvermacher studied at Julliard with Solveig Santillano, assistant professor of dance. Pulvermacher’s piece uses five-gallon plastic buckets as props. Performers use the buckets at the beginning of the dance routine to create a percussive beats that set up the choreography that is in the rest of the number.

Another interesting part in this performance that is unusual is adding lights to buckets. These are used as spotlights that highlight different dancers on stage. Pulvermacher shows how versatile a bucket can be.