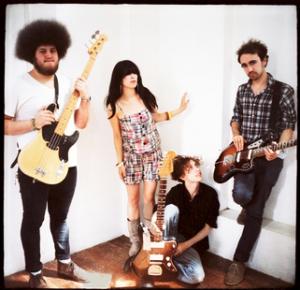 For me, music comes and goes. I will listen to an album a couple of times and then never listen to it again.

On a rare occasion, I will like whole album and return to it from time to time.

One of those albums is “Yuck” which is the self-titled album for the band Yuck.

Yuck is a London band that could have come straight from the ’90s and toured with some of my favorite bands from that era, such as Pavement, Sonic Youth and Dinosaur Jr. This is due to their fuzzed out, indie rock tone.

Daniel Blumberg, Yuck’s singer/guitarist/songwriter is a master when it comes to writing for this band. This album will send you on a whirlwind of emotions. Songs like “Suicide Policeman,” which a soft-spoken acoustic number about being on suicide watch for someone who is close to you and trying to talk them out of it.

Followed immediately by “Georgia,” a bright, lighthearted song that features male and female vocals thanks to the band’s bass player Mariko Doi. The first track, “Get Away,” is my favorite track on the album.

I like the fuzzed out bass line that really sticks out, how the lead guitar part dances so nicely with the rest of the song or the lyrics which describe wanting someone so much that you can’t get her off your mind.

Other tracks, like “Holding Out,” have a strong grittiness and tons of feedback over distorted vocals, creating the fuzzy soundscape that would make Thurston Moore, Sonic Youth’s guitarist, smile.

If you are into bands from the ’90s, Yuck is the right band for you. This old-school band will have their melodies stuck in your head instantly. Don’t let the name of this band deceive you; their music is anything but “yuck.”