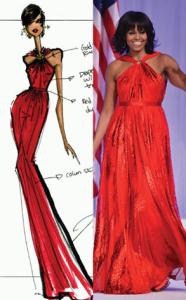 enonline.com photo: Jason Wu’s sketch became a reality when the First Lady picked his design to wear to the Inaugural Ball.

Monday, Jan. 21, the world watched as President Barack Obama took the oath of office for the second time.

While this was the purpose of the event, the fashion industry was anticipating what designer’s gown the First Lady Michelle Obama was going to wear to the Inaugural Ball.

All of the fashion critics and editors predicted Michelle Obama to wear a different designer than she had chosen in 2009.

This year she shocked audiences, not only with her choice to wear another Jason Wu gown, but also with her new bangs, as well.

The red dress she wore was made out of a lightweight chiffon fabric, similar to her dress in 2009. The dress allowed her to move freely as she and the president danced to Jennifer Hudson singing “Let’s Stay Together.”

When planning to wear something for an important event, you must consider what you want to feature. Michelle Obama is enthusiastic about exercise and staying healthy, so she has a great body. One of her best features is her arms, and the dress she chose highlighted this area.

Some say she made the choice of Jason Wu to stay safe, but the dress exemplified that playing it safe works for Michelle Obama.

As a fashion idol, Michelle Obama has been known to recycle outfits and accessories as one of her trademarks as First Lady. She also frequently wears affordable brands such as J. Crew, Talbots and Liz Claiborne.

Michelle Obama has been known in the fashion industry as one of the best-dressed women in America. By wearing the Jason Wu dress, she only rose higher on the list.

Clearly, she has started the year 2013 off on the right foot in fashion.