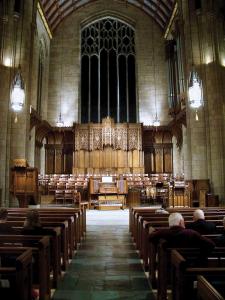 Rachel Reszler photoYou may have previously seen Erik Meyer perform in the opening Faculty Recital as an accompanist.

This past week he starred in his own recital, the second in this year’s Faculty Recital Series, on his primary instrument, the organ.

The recital was held on Thursday, Oct. 8, at 8 p.m., at the First Presbyterian Church of the Covenant in downtown Erie.

It is unique that the series is held off campus, and sophomore Brianna Steves said, “It was cool to go to a new venue to hear one of our professors play.”

Meyer began studying the organ at age 13 and earned his Bachelor’s and Master’s degrees of Music in organ performance from the Peabody Conservatory in Baltimore.

Meyer has been an adjunct member of the music faculty since 2007.
The recital started off with a piece titled “Introduction & Passacaglia in F minor” by Max Reger. 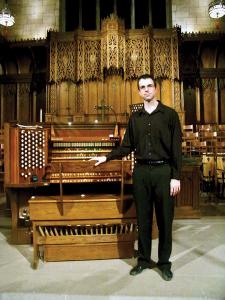 Rachel Reszler photo
This piece had many different varying sections that varied in both dynamics and texture.

Most of Meyer’s recital was as varied as this piece was, continuing with “Five Dances” by Calvin Hampton.

It had five movements, each representing a different social group and the way that they dance.

All five movements had very different sounds and were based on different rhythmic ostinatos.

The last piece played was “Suite, Op. 5” by Maurice Durufle.

This piece has three movements, each with a unique feeling.

The first was dark and heavy, while the second was playful and sweet, finishing with a fast and harsh third movement.

“The organ is a very beautiful and complex instrument that not many people appreciate, and it was interesting to see people’s reactions to it,” said sophomore Lindsay Nikithser.

The next faculty recital will be Jan. 14, in the Walker Recital Hall, featuring Lydia Howery.