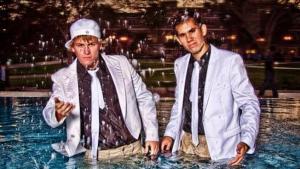 Contributed photo: The White Panda and The Super Mash Bros. are two separate groups of DJs who are scheduled to perform at Springfest ‘13.

This spring, MSG is bringing two phenomenal sets of DJs to Springfest ’13—The White Panda and Super Mash Bros. But who are these people and why should you go see them?

The White Panda consists of two overnight internet sensations from Chicago who started their careers separately before joining forces.

They were honored to have shared the stage with famous acts such as Tiesto, Benny Benassi (the guy who did “Cinema”) and Steve Aoki.

The White Panda has a much simpler form of making their mash-ups.

Instead of taking a large number of tracks and snipping them apart to make a three-minute track with 40 different songs, they take an average of three tracks and use them in uncommon and interesting ways that is much easier to listen to.

For example they take vocal lines from Kanye West’s “Good Life” and the production from M83’s “Midnight City” and combine them to get a track called “Midnight Life.”

The other DJs that will be featured on campus are the Super Mash Bros. The group is made up of three LA based guys—two DJs and one guy that is responsible solely for digital pyrotechnics.

His job is to take anything on the Internet that is viral, or other projects that reflect the Internet world, and incorporates them into their sets.

Super Mash Bros.’s form of mash ups are extremely high energy, incorporating many types of musical samples and mash them up to create tracks to keep you dancing all night.

If these two DJs sound like something you may like, you are in luck because all of their albums are free. You can download The White Panda and Super Mash Bros. on their websites.