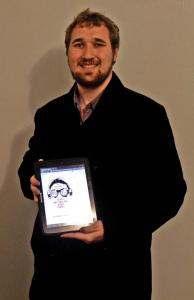 “Come out as a gamer, don’t be afraid of doing it. I am obviously not afraid to say I am a gamer. I am always in people’s faces about it,” senior Charlie Wheaton said.

Wheaton, new author of “The Poor Man’s Guide to Weird and Unusual Video Games” expressed his feelings about the gaming community.

His new book was released on amazon.com for the Kindle. The book is about games that anyone can play online and on a budget.

“Gaming has always been a very prominent part of my life,” Wheaton said.

During his freshman year, Wheaton began writing game reviews for The Merciad.

After writing for The Merciad his freshman and sophomore year, Wheaton decided to combine his reviews into one book. The book also includes other non-published reviews.

Aside from writing, Wheaton enjoys playing and creating video games. He is also a strategic communications major with a minor in geology, which has contributed to his successful book.
“You can blame Professor McKenzie for that,” Wheaton said. “Having the science background helps with the problem solving we do in communications.”

While Wheaton is not sure if he knows enough about geology to write a book about it, he will continue to write about other topics. He also aspires to work in the communication field or in the gaming or toy industry.

“I would like to market and promote games,” said Wheaton, “I also understand what it takes to develop a game but that is no longer my focus.”

“The Poor Man’s Guide to Weird and Unusual Video Games” is only available for the Amazon Kindle at the moment, but Wheaton said it might be published as a hard copy in the future.

“Amazon makes it easy to self-publish. It depends on how popular the book gets on Amazon if I publish it otherwise,” Wheaton said.

If you don’t have a Kindle, don’t worry. Kindle apps can be downloaded on computers, phones and iPads.

Wheaton paused when asked about his advice for other writers.

“If you feel like you want to write or do whatever you want to do, do it in the best way that you can,” said Wheaton. “At least you can say you’ve done it. Do you want to look back and say ‘I wish I would have’?”