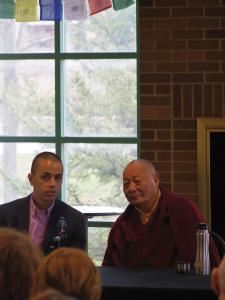 Zach Dorsch photo: Buddhist monk Khenpo Karthar Rinpoche speaks to students about how everyone can bring peace and harmony into the world.

His morning lecture on “Discovering Peace and Well-Being in the Mind” was well attended by students, faculty and other members of the Mercyhurst community.

The Rinpoche expressed the need for each person to work towards individual and world peace by using their own mind, knowledge and skills. He also explained the need to do this in a selfless way.

“Without altruistic motivation, knowledge can be abused [and] severe destruction and harm are brought into the world.,” the Rinpoche explained.

The visit from the Rinpoche was co-sponsored by the Religious Studies Department and the Erie Karma Thegsum Choling, a Vajrayana Buddhist meditation center, which follows the Tibetan Karma Kagyu tradition.

Professor of Religious Studies Thomas Forsthoefel said this event, like the department’s courses and other programs, aimed “to broaden horizons and open minds.”

Ordained a monk at the age of 12, the Rinpoche, now 89, has acquired extensive experience in meditation, philosophy and monastic arts.

In 1975, he was recognized with the title of “Choje Lama,” meaning superior dharma master, by the leader of his lineage, His Holiness the 16th Karmapa.

The Rinpoche is one of the few senior lamas in the world who was trained in Tibet before the Chinese invaded in 1959.

The Rinpoche immigrated to the US from Tibet the following year to facilitate the development of Karma Triyana Dharmachakra, a Tibetan monastery located in Woodstock, New York. He is currently serving as the abbot, or leader, of the monastery, which also follows the Karma Kagyu tradition of Tibetan Buddhism.

Among his other accomplishments, the Rinpoche has also authored two books on Buddhism, the “Wish-fulfilling Wheel, Practice of White Tara” and “Taking Refuge: A Teaching on Entering the Buddhist Path.” Each of the books discusses different elements of Buddhist practice, philosophy and thought.

From the lecture, Forsthoefel hoped students would note “the ubiquitous connection between philosophy and psychology in Buddhism.”

“Philosophy is never abstract reflection,” said Forsthoefel, “but aims to impact the workings of mind to issue in happiness and peace.”

“You can make a difference in the world,” the Rinpoche said, “and of this I’m absolutely certain.”