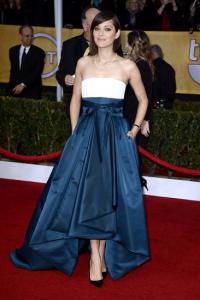 media1.onsugar.com photo: Cotillard kept it classic on the red carpet in Dior.

The Golden Globes, the Oscars, and Screen Actors Guild (SAG) Awards are not always about acting, but it’s about fashion, too. To see what each celebrity is going to wear on the red carpet is one of the most anticipated feelings of the year.

As each starlet walks down the carpet thousands of photographers are capturing pictures from every angle, and as celebrities they most look their best. Choosing a dress to wear to each of these ceremonies is crucial, some take fashion risks, and some play it safe.

Before award season begins, actresses must choose a dress they have to make sure no one else will wear that dress, which is truly where the competition begins. The search for the perfect dress could take months.

Some choose well-known designers, where as others choose new and up-and-coming designers. For the top three best-dressed choices of the Globes, the Oscars and the SAGS, each of these women choose designers who have great success and are constantly dressing celebrities.

The beginning of award season starts off with the Golden Globes, which really sets the stage for the fashion choices of each actress. The best-dressed winner for the Golden Globes was Emily Blunt, a well-established fashionista. Blunt chose a gold beaded dress designed by Michael Kors.

The pictures taken of this dress from a distance do not do it justice because the detail and beads create a very intricate design. The dress also features a small cut-out that wraps around the back, which is subtle, yet sexy, and is an up and coming trend.

Blunt paired her outfit with fuschia colored accessories including a ring, earrings, and bracelet. Her hair and makeup really brought this outfit together, proving Blunt true to her title of fashionista.

The next award show after the Globes is the SAG awards, which is less formal. Marion Cotillard was beyond best dressed at the SAGs, with her new asymmetrical haircut. Cotillard wore classic Dior, which might have been a tribute to her French heritage.

The dress was an old school silhouette, styled with a ribbon across the waist, and was shorter in the front, and longer in the back. This blue and white gown was a definite risk for Cotillard. She kept it very simple and styled it with a beautiful diamond necklace and black pointed heel shoe.

The final show is The Academy Awards, or the most important ceremony for actors of the year. The best-dressed woman of the red carpet was 2012’s leading lady Jessica Chastain, who stat in Armani Prive. Her dress was a strapless, figure-hugging gown that sparkled with a silver shine.

Chastain’s choice was risky because her dress was a very light color, which could make her look very pale, but this champagne-colored dress made her gleam. Her hair was done very simple, and she paired it with diamond earrings, and a bracelet.

Overall it was a huge success for fashion during award season this year, where some stepped out of their comfort zone, and some stayed in it. It will be interesting to see if any of these new fashion trends catch on for spring fashion 2013.