Approximately 364 million years ago, a giant fish known as the Dunkleosteus swam around in the salt water ocean that once was the Erie area.

Assistant Professor of Geology and Paleontology Director Scott McKenzie has been investigating and putting back together recovered pieces of a Dunkleosteus fossil, assisted by junior Patrick Nolan.

Due to a heart attack and stroke, McKenzie was unable to go into the field to search for fossils. In his absence, a friend found the Dunkleosteus fossil and backpacked it out in pieces so it could be put back together again. 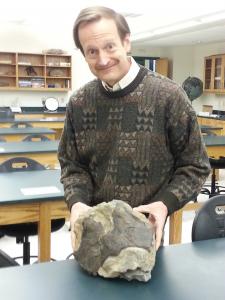 Sami Rapp photo: McKenzie teaches geology to students at Mercyhurst.
“The Dunkleosteus was a deep ocean fish,” said McKenzie, “and when it [this one] died, its parts fell apart in one area. That’s how so much of it can be put back together.”

McKenzie said he was not sure what originally interested him in the field he is now quite accomplished.

“My earliest memory,” said McKenzie, “was picking up rocks to try and see what they were.”

The Dunkleosteus fossil turns out to be a giant fossilized rock. While some fossils record a length as long as 30 feet, this recovered fossil is between 15-25 feet long.

Shaped somewhat like a tadpole, it had an armored front and a soft body. The latter has never survived so it is hard to tell what the internal organs of the fish looked like, according to Nolan. However, many things can be discerned from the fish’s armored frontal plates.

“The Dunkleosteus had no teeth,” said Nolan, “and it was not a very fast fish because of its size.”

The Dunkleosteus was also a predator to be reckoned with, as it ate sharks and shared a distant relation with them.

“It could open its mouth very fast, in effect creating a vortex that would sweep anything in range into its mouth,” said Nolan about the Dunkleosteus’ feeding habits.

Nolan’s passion for dinosaurs and ancient life in general never left him from a young age. So, when he took a geology class with McKenzie, Nolan first took an interest in the Dunkleosteus fish.

Eventually he would write a research paper on a possible hypothesis for the Dunkleosteus’ extinction.

McKenzie hopes to eventually display the Dunkleosteus fossil on campus in the future, though space is certainly a pressing issue because of the fossil’s immense size.