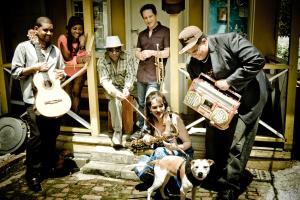 Jazz music in particular has always had a home not only on campus, but also is recognized as a staple in the Erie community.

On Monday, March 18, the Gabriel Alegría Afro-Peruvian Sextet will display their talents during a live performance held at the Erie Art Museum beginning at 7 p.m.

Coming straight out of Latin America, Gabriel Alegría, creator of the sextet and composer of much of the group’s music, claims that his music is a combination of “jazz harmonies from the United States, and Afro-Peruvian rhythms and sensibilities.”

The unique formation of cross-cultural jazz is a creative concept based on the history of black music from the coastal areas of Perú.

Alegría has a knack for merging the primordial rhythms of his native country of Perú and the contemporary jazz technique that originated in the American south in the early 1930’s. Both genres of music are heavily based on syncopated rhythms coupled with strong, prominent bass lines— making them a natural match.

The Afro-Peruvian Jazz Ensemble was formed in 2005, and since then has performed in over 400 concerts all over North America.

On top of that, the band has performed for the United Nations and various diplomatic agencies around the world.

Most recently, the band completed the famous Tour Perú, where they gave their fans the opportunity to travel with the ensemble on a tour throughout Perú.

Alegría has had the opportunity to perform with The Peruvian National Symphony, and various concerts and/or on recordings with multiple well-known performers.

Their fun, from-the-heart and energetic music has the goal of reaching as many people as possible to create an original experience of Afro-Peruvian jazz. Alegría has had an undeniable presence on North American radio, along with his albums reaching the top of the Jazz Week World Music charts and also College Media Journal jazz charts.

The Erie Art Museum is at 411 State Street in downtown Erie’s cultural and economic zone district, occupying a group of restored commercial buildings and a modern expansion.

This feel-good music ensemble is certainly not one to miss out on.

Admission to the concert is free, with a suggested $15 donation. For more information, contact The Erie Art Museum at their website, erieartmuseum.org, or by phone at 814-452-1744.

Sample music and more about the band can be found at gabrielalegria.com.