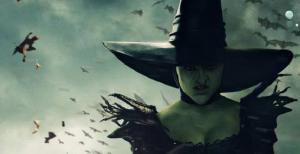 Released last week, director Sam Raimi’s “Oz The Great and Powerful” takes us back to that colorful land over the rainbow that we know and love so well.

Realistically, it’s hard to make a follow-up, or in this case a prequel, to what many consider to be the greatest film of all time. Raimi, however, manages to accomplish this feat while also delivering something quite fresh.

As the film begins, we’re brought back to the colorless world of 1905 Kansas. Here we meet carnival magician Oscar Diggs (James Franco), a womanizing trickster who refuses to settle down and desires to become famous and rich.

Suddenly, a tornado whisks him off to the land of Oz, where he’s proclaimed by a witch named Theodora the Good (Mila Kunis) to be the prophesied great wizard who would save Oz against the Wicked Witch.

Oscar is certain he is not the prophesied wizard, but envious of the fame and riches that accompany being so, he puts on a ruse to trick the people of Oz. However, the threat of the Wicked Witch is quite real, and he must attempt to become the greatness he claims to be in order to live up to his lies.

The visuals of ‘Oz’ are immensely captivating, especially in 3D. I was also pleasantly surprised to find that there was little given away in the trailers, and much to be discovered as the film progressed.

Many people may liken this movie to Tim Burton’s Alice in Wonderland; however, I found that I was much more satisfied with Raimi’s final product.

In comparison, this film had a more cohesive plot, which is held in congruity with the stories we’re most familiar with.

The acting at times can be somewhat wooden, but this is rivaled with a healthy dose of humor laced throughout the film. Franco plays a protagonist that you rightfully cannot trust, and by contrast there is much heart to be found in the loyal companions he gains along his adventures.

While he recalls some images from his previous films, Raimi is unfortunately forced to restrict his use of violence to appease Disney, despite his deep horror roots.

In my opinion, a PG-13 rating would go a long way to increasing the already immersive quality of the film by adding a bit more realism.

‘Oz,’ however, is ultimately a worthwhile journey with many surprises along the way.