The Mercyhurst baseball team has just come back from a long road trip.

Their trip began playing three games in North Carolina against Chowan University. The Lakers went 2-3 in that series.

The Lakers recently swept Salem International in three games bringing their record to 9-7. While on the road trip, the team pursued a record.

Senior pitcher Ben Rawding was chasing PSAC history, the most consecutive win streak. The previous record was 14 consecutive wins and Rawding broke the record in Florida against Queens College.

Rawding recorded his 15th consecutive win with a 6-1 victory. His last loss came to Slippery Rock on April 29, 2011.

Rawding is very humble about breaking the record and giving praise to his teammates for helping him along the way. 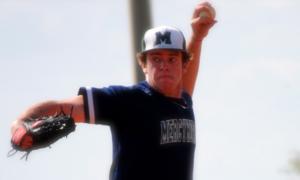 Senior Ben Rawding currently holds a 2.49 ERA with 34 strike-outs.: Dave Leisering photo
“Even though it is an individual record, it’s a compliment to the teams I have been on here at Mercyhurst,” said Rawding. “Without being on such tremendous teams over my career, breaking this record would have never been possible.”

Allowing around two runs a game, Rawding shows his dominance on the mound and ability to hold teams to low runs. This allows the team to manufacture their own runs to score more and feel comfortable with their lead.

The Lakers will travel to Washington, Pa., on March 15 and 16. There they will play West Liberty University in a double header and Grand Valley State University the next day for two. First pitch against West Liberty is set for 1 p.m. and Grand Valley State is to be announced. They will return home for a double header against PSAC West foe California University set for 1 p.m. at the Mercyhurst Baseball Field.