His primary task is to create an environment in which students, faculty and staff can work together to create an outstanding community of learning.

His new job will also entail being involved with the Lourdes community to develop a future vision of the school and area through new program development, fundraising, reputation enhancement and increased enrollment.

“It is an excellent opportunity, and I am very excited about it,” said Livingston. “Lourdes is a great university with a clear sense of its mission and great potential for growth.” 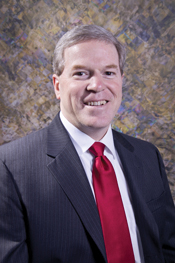 mercyhurst.edu photo: David Livingston, Ph.D., named president of Lourdes University in Sylvania, Ohio.
Lourdes University is a coeducational liberal arts institution of 2,600 students founded in 1958 by the Sisters of St. Francis of Sylvania.

The institution is known for its quality academic programs and personalized attention afforded its students.

Still, Livingston knows it will be difficult to leave Mercyhurst.

“After 15 years we have developed some great relationships and have so many good memories,” he said. “I will miss the students and friendships that I have developed over the years.”

In his time at Mercyhurst, Livingston has had many accomplishments, most notably raising $32 million of a $50 million capital campaign goal two years ahead of the planned date, as well as acting as a project manager for the new Center for Academic Engagement building completed over the summer of 2012.

When Livingston’s new position becomes effective July 1, Msgr. David Rubino, dean of the Walker School of Business and Communications, will step up and take charge of the advancement function vice president of external affairs.

Regardless, he is excited by the challenge his new job presents because he will be working to bond together all of the school’s external factors in a better way.

In the case of private institutions like Mercyhurst, this includes finding ways to raise revenue other than by raising tuition.

When asked if anyone else was in consideration for the position, Rubino said, “I don’t think so because it was done internally. Had it been done externally, there would have been.”