History was made Wednesday, March 13, when the Vatican sent up white smoke, signaling the choosing of a new leader of the Catholic Church.

Cardinal Jorge Mario Bergoglio of Buenos Aires was chosen as the 266th pope of the Catholic Church, taking the name of Pope Francis.

It was a historic decision coming on the heels of the surprising resignation of former Pope Benedict XVI. The Vatican chose the first Latin American, as well as the first Jesuit priest.

Pope Francis spoke from the balcony of the Vatican on that day, addressing the large crowds gathered in the city to witness the historic moment. The world has more than 1.2 billion Catholics, who celebrated the news of the new pope. 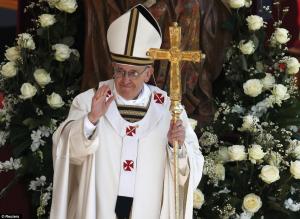 dailymail.co.uk photo: Pope Francis graces the public at his inauguration Mass at the Vatican.

Mercyhurst celebrated the pope’s installation with a short service on Thursday at the Christ the King Chapel. The service was about 15 minutes long, and all faculty and staff as well as students were invited. The service consisted of a Scripture reading, a hymn and a brief homily.

“We wanted to do something to bring people together, if they so chose,” Father James Piszker said.

The new pope is stepping into the papacy during a key period of transformation for the Roman Catholic Church.

Piszker believes that Pope Francis “will set a new style for the papacy which is already becoming evident. He is a very simplistic man, and a champion for the poor, which I think he will emphasize this social justice teaching throughout his papal rule.”

Senior religious studies major Tess Sinke agrees, stating that “he has proven to be an advocate for the poor, and I think he will continue to do so throughout his time at the Vatican.”

At a press conference on Saturday the pope highlighted his intentions to work closely with the poor, indicating it should extend beyond charity work and mission trips stating, “How much I would like a poor church, for the poor.”

Many are looking at Pope Francis to address the major concerns surrounding the Catholic Church and he is already making notable changes.

The pope is known for his brief, sincere homilies filled with wisdom. At Mass on Sunday, the pope said “The message of Jesus is mercy, for me, and I say this with humility, mercy is the strongest message of the Lord.”