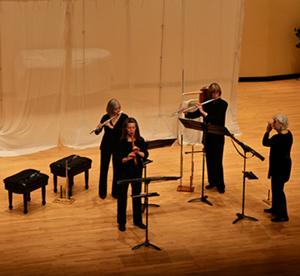 Interesting is a word that is used and over-used daily and is often used with no real meaning behind it. The Merriam-Webster dictionary describes the word “interesting” as something that holds one’s attention, or arouses interest. With this very strict definition in mind, I will call last Monday’s performance by Flute Force in Walker Recital Hall “interesting.”

Founded in 1981, Flute Force is seen as America’s paramount flute quartet. The group gave a stunning recital that was divided into two parts, separated by an intermission. The first portion of the concert featured three works that included flutes and various other instruments. One of the wind instruments used in the first piece isn’t common in western cultures— the Shakuhachi.

The second part of the recital consisted of a 40-minute film titled “A Bookmobile for Dreamers.” Utilizing three flutes and a Theremin, the abstract film featured a recorded soundscape and a video which delved into a meditation on books, libraries and the culture that surrounds reading. Motivated by the love and joy of browsing books, A Bookmobile for Dreamers glorifies the human imagination as it is instigated by the written word to create images of beauty and magnificence.

A small, toy bookmobile makes its rounds as the film depicts the dives into various stories and scenes, all of which are extremely abstract and gives the human imagination a field day of inspiration. Utilizing stop-motion animation, the film features the metaphysical with the three flutes and Theremin acting as a Greek Chorus

Audiences on Monday had the extremely rare opportunity to hear the piece performed by the composer herself. Elizabeth Brown played the Theremin so exquisitely that many seemed to be mesmerized by the performance. It’s complicated enough to perfect the art of playing an instrument, let alone one that is played without physically touching it in any way.

The Theremin is the only instrument in the world that can produce pitch and be played successfully without being touched. It operates on radio waves and utilizes two antennae, which the player waves their hands in front of, producing volume and pitch.

Overall, the concert was a huge success — causing the audience to grant multiple ovations to the renowned group.