Over the course of the year, Mercyhurst University will be relocating its farm’s operations from the Girard campus to its North East campus.

The decision not only stems from the lack of academic growth on the West campus, but also on the availability of resources in the area. 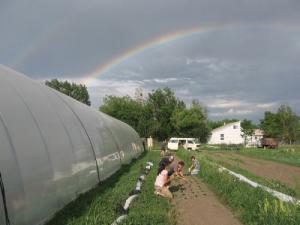 Contributed photo: Students volunteered their time to help plant crops at the farm at the Girard location.

Along with the relocation of the farm, the school has contemplated the possibility of closing Girard’s academic programs in May 2014.

“There’s no real demand for growth in the area. The population of students and demand for programs has somewhat decreased,” Gamble said about the possible closing.

“The move of the farm to North East is going to be a benefit to students from both the Erie and the North East campuses. Students will have more resources and easier access to this valuable tool,” he said.

Conditions in Girard made it difficult to maintain the farm efficiently on the West campus, due to the lack of access to water or medical care near the farm.

“Our West campus lacks the density of student population, equipment, trucks and so on; it made sense that, if we moved to North East, we’d have all these things, as well as more access to everything,” Gamble said.

With the move, the school plans to develop programs in sustainable agriculture, as well as enriching the culinary arts program it already offers.

“People in the new sustainable agriculture major can utilize the farm as part of their educational experience,” he said.

Although there are no immediate plans, the farm would be able to undergo expansion as time goes, with the addition of vineyards to work with local wineries being in consideration.