Worldwide, 175,000 children are diagnosed with cancer each year. In the U.S., more children die of childhood cancer than any other disease—more than AIDS, asthma, cystic fibrosis, congenital anomalies and diabetes combined. 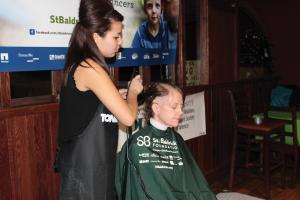 Lauren Taylor: Happi 92.7 host Shari McBride supports the cause and gets her head shaved.

One of the foundation’s primary fundraising efforts is pledging money to shave a person’s head.

Fourteen participants shaved their heads to support the cause, including several Mercyhurst students.

“The event could not have gone any better, and I’m looking forward to what next year will bring,” PRSSA President Lauren Taylor said.

The club plans on continuing this event next year.

Upon deciding on an event to organize, PRSSA chose St. Baldrick’s because of its teaching abilities and visual capabilities.

“PRSSA is dedicated to creating learning opportunities for all of our student members, but in learning to do so we are blessed to have the opportunity to follow in our Mercy tradition and give back. The St. Baldrick’s Foundation provides numerous resources to help us host a successful event,” senior Joe Pudlick said.

One of the club’s goals besides raising money was to raise awareness of what this organization does. Not only was money raised, but the club did a wonderful job reaching out to the major media outlets in Erie and received an enormous amount of coverage of the event, bringing the message to the Erie community.

The event was filled with varying emotions when each “shavee” had their turn.

An especially touching moment for all in attendance was when Fran Morris sat down to have her shoulder-length, brown hair shaven.

“My favorite part of the event would absolutely have to be seeing the reactions of the shavees themselves after going through the head-shaving process,” said PRSSA Treasure Lauren Smith. “The most memorable one for me was Fran Morris, the mother of a childhood cancer survivor who was shaving her head in honor of her son. The emotions were definitely flying around that room.”

Morris and her family have been through an emotional ordeal the past two years, when the family found out that Matthew Morris, 15, was diagnosed with leukemia in 2011.

Matthew is currently in remission and doing well, but his mother wanted to participate in this event to help other families from having to undergo the same emotional trauma.

The event also received media coverage by local radio station Happi 92.7 morning radio show, hosted by Shari McBride. The promise was made to listeners that if the goal of money was reached she would shave her head.

When she arrived at the event on Saturday, she kept her promise and shaved her head in support of childhood cancer research.

The event was a success in all aspects, it was a learning opportunity for the students involved in PRSSA, money was raised for a worthwhile cause and awareness of The St. Baldrick’s Foundation mission was spread.