Buzz stirred when Mercyhurst Compliments swept Facebook, but recently several Mercyhurst Twitter accounts have popped up and are getting students and faculty talking. 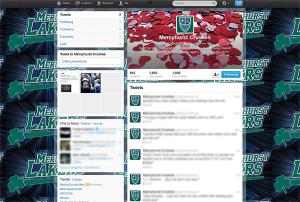 Contributed photo: One of the most popular new Twitter accounts, MercyhurstCrushes allows students to anonymously share their secret love interests.

The craze started with HurstMakeouts, which took several days to unleash a post. Soon after posts were made on this account, the other accounts followed.

Many of the comments are funny and playful, but some take it too far and become a bit risqué.

Most students around campus seem to enjoy the accounts, but some are skeptical about the filthy and over-the-top comments.

“I think the accounts were made with no ill intent in mind, but I worry about the repercussions that could come from it. Some of the tweets could be misconstrued by those involved as very hurtful and lead to too many unintended consequences and hurt feelings,” Vaccaro said.

President of Mercyhurst Student Government (MSG) Richard Molloy has his own opinion on the matter.

“Although the majority of the tweets are light hearted and somewhat entertaining, there is a line that has been crossed in terms of naming students and some very personal information,” said Molloy. “I have had students come to me about how upset they feel that someone is sharing private or degrading information with an anonymous person.”

“On the one hand, they are very entertaining. On the other, however, there is the potential for the accounts and their content to hurt individuals,” he said.

Several other colleges and universities have accounts much like those at Mercyhurst. However, does the size of this university change the dynamic of the accounts?

“While I know this is a big trend at many other universities, with a school of Mercyhurst’s size I feel like this takes on a whole different angle. Everyone knows everyone,” Molloy said.

Despite some mixed feelings, there is positive reaction from others in the student body.

“I absolutely love the new Twitter accounts,” said junior Chris Gaertner. “They’re something new and exciting and I am obsessed with following their tweets.”

“They are super fun to follow,” said Cordova. “I’m sure everyone has a little anxiety over whether their names are going to show up in an anonymous tweet or not.”

Since the accounts are merely on a student-to-student connection, nothing will be done by the university to the accounts. The amount of reach may be monitored as anything marked with the Mercyhurst name is, but the accounts are nothing alarming to the Public Relations department.

“Social media gives people the freedom to express themselves whether it is funny or inappropriate. There’s not really any way to control it,” Web Coordinator Chris Norris said.

Slim worries for bad press exist as the accounts mostly exist throughout current students and should have no hindrance on incoming or prospective students.

Still, this is something the university will not be promoting.

Mercyhurst does try to use social media, however, to improve the university. It follows the account Mercyhurst Problems and tries to address problems that students express.

“It shows how active our social media communication is even at a smaller school like this,” said Norris. “It’s encouraging to know you can give a message (to students) with social media.”

The real question is, how long with this craze last?

“I really think they will just die out; just another fad to hit the Mercyhurst University community,” Lombardo said.

Either way, the new Twitter accounts have students buzzing of their crushes and confessions around campus.