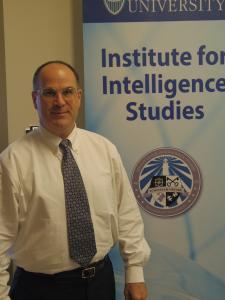 We all love party games, especially ones that deal with cards. Thanks to Intelligence Studies Professor Kristan Wheaton, Ph.D., you can add another card-based game to your collection.

The game is called “Widget.” Wheaton described it as a card game played with words.

The players, roughly three to six, take the cards and try to create a gadget or gizmo that does something silly. The point of the game is to make the weirdest gadget. After creating
the gadgets, the players then vote on who has the silliest gadget out of them all. The player with the gadget that has the most votes wins.

Wheaton, who has been designing games for 30 years, first thought of this game back around October 2012.

One day, Wheaton woke up from a dream and the idea for the game was in his head. He proceeded to rush to his office and wrote the whole thing down.

All of the cards from the game are illustrated by various artists from around the world. A total of 47 different artists contributed to designing cards for the game. Some of these artists come from places such as Australia, Sri Lanka, Nigeria and Argentina.Wheaton funded the development of this game through a page on Kickstarter.

On Kickstarter, one has a maximum of 30 days to reach the goal amount of money needed to fund a project that he or she has established on the website. Wheaton needed a total of $4,000 in order for his Kickstarter to be successful. He got to 40 percent of his goal after four days. He had received $1,638 from 58 people who decided to fund the game.

The Kickstarter for “Widget” ended Saturday, April 6. No more contributions can be made at this time. Wheaton now hopes to begin producing the game.

Wheaton is using the production of this game as an experiment to see how entrepreneurs can use intelligence analysis as a way of making their projects successful.