Review: The Church of Morrissey 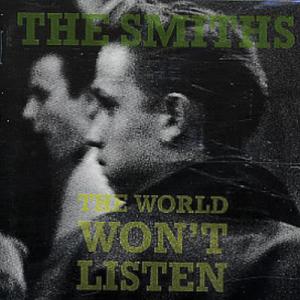 rockfiles.co.uk photo: The Smiths’ album “The World Won’t Listen” features collections of singles and B-Sides.
Author Stephen Chbosky once wrote, “Youth commands that all must endure a Smiths phase. If it was not you yourself who, at one point, attended the church of Morrissey, then at least a family member or someone close to you did.”

I myself joined the “Church of Morrissey” with the band’s second compilation album “The World Won’t Listen.”

Hailing from Manchester, The Smiths formed in 1982 when singer Steven Morrissey met guitarist Johnny Marr and the two began working on demos. After adding bassist Andy Rourke and Mike Joyce on drums, The Smiths were fully formed.

They would soon become one of the most important indie rock bands of all time.

“The World Won’t Listen” features a collection of singles and B-sides from 1985 to 1986 and is viewed as an essential to most fans.

Narrowing down the tracks to discuss on this album was a challenge, but I will talk about my personal top three tracks off of the album.

“There Is A Light That Never Goes Out” really demonstrates how Morrissey can use his lyrics to relate to generation after generation of youth.

This song is about being madly in love with a significant other but feeling the pressure of alienation at home. Morrissey sings the passionate chorus “And if a double-decker bus crashes into us/to die by your side is such a heavenly way to die.”

The next track, “The Boy with the Thorn in His Side,” is about the band’s struggle with getting its music played on the radio.

Morrissey attacks with lyrics “Behind the hatred there lies a murderous desire for love.” Every aspect of this song really connects Johnny Marr’s subtle yet powerful guitar part with the synthesized strings wonderfully.
The last song is probably one of The Smiths most recognized songs.

“Asleep” is a song I could listen to on repeat and never get tired of it. That is because of the pure art of the lyrics, that can be interpreted so many ways, mixed with the simplicity of just a simple piano part.

Most people would say this song is about suicide, but I feel like it is about knowing you are going to die very soon and not going to wake up again. So as your last wish you want your significant other to “sing me to sleep.”