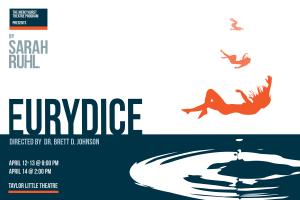 Contributed photo: Students prepare to stun audiences on campus this weekend with their production of “Eurydice.” Complete with the use of running water, fire and a set that is a masterpiece in itself, “Eurydice” will have audiences begging for more from the new theatre program.
The arts at Mercyhurst seem to be continually “one-upping” themselves in terms of performance and content quality, along with sheer talent from the students. “Eurydice” will not only continue this trend, but also bump it up to a level that this campus hasn’t seen in years, if ever.

The cast will perform 5 times with a special guest performance on Wednesday, April 10, a presentation to local grade school students on the morning of Thursday, April 11, and with three performances, which are open to the public, April 12 – 14.

“Eurydice,” by Sarah Ruhl, is an updated version of the age-old Greek myth of Orpheus and Eurydice.

Traditionally, the tale is told from the eyes of Orpheus as he descends into the underworld to rescue his beloved. With the creative vision of the director, Brett Johnson, Ph.D., “Eurydice” comes complete with running water, real fire and a set that is entirely made up of slanted surfaces and sand.

Sarah Ruhl’s “Eurydice” is told through the eyes of the heroine as she discovers a whole new world and meets a menagerie of interesting characters.

Sophomore Jordan Strange plays Orpheus, the musician who has had the love of his life ripped away from him on his wedding day.

“I would have to say my favorite part of this production is the story itself. It literally draws you in and it draws you deeper, you can’t help but feel attracted to it because it’s so relative and real. The honesty/sincerity of it all is just so gripping,” Strange said.

The storyline follows the love of Orpheus, played by Strange, and Eurydice, played by freshman Sarah Creighton, who dies too young on her wedding day. After discovering that an Interesting Man, junior Chris Gaertner, has a letter written by her deceased father, Eurydice follows the Nasty Interesting Man to her death.

The plot then follows Eurydice into the Underworld where she meets Ruhl’s vision of a greek chorus- a group of stones who represent the long-dead residents of the Underworld. Eurydice also meets her father, although, after being dipped in the river Styx, she does not recognize him.

Gradually, the two become reacquainted, as her father parents her as a young girl- helping her to acquire language and telling her stories about their family.

Meanwhile, Orpheus struggles to make his way to the Underworld and find his beloved. The Father warns Eurydice that if Orpheus should turn around and see her before they’ve reached the end of their journey, she will die a second death.

If the realistic portrayal of this mythic story isn’t interesting enough, the set of the show itself is unique and should be showcased all on its’ own as a work of art. Incorporating the use of fire, water, sand along with intricate sound and lighting pushes this production to a level that the city of Erie hasn’t seen in years.

During the 4-week rehearsal process, actors were encouraged not to ‘act,’ but rather listen and respond – to become invested into the show on a deeper level. Freshman Tonya Lenhart describes her experience of working with the Theatre Program in its inaugural production.

“My experience so far in the rehearsal process has been an interesting one to say the least. But it has also been a rewarding one. I was given the chance to discover my character in a way I never had the opportunity to do so before,” said Lenhart.

Sarah Ruhl’s “Euryidce” will be performed in the Taylor Little Theater in Weber Hall, Friday, April 12, and Saturday, April 13, at 8 p.m. and Sunday, April 14, at 2 p.m. Ticket information can be found at pac.mercyhurst.edu or by contacting the D’Angelo Performing Arts Center at 814-824-3000.

(Editor’s note: Mathew Anderson is a member of the cast of Eurydice.)