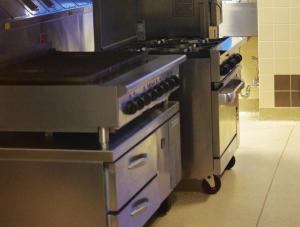 Zach Dorsch photo: The hospitality department was able to acquire new appliances for their kitchen with the help of the Statler grant.

Mercyhurst’s Hospitality department had a dream to obtain their own space. With a grant thanks to the Statler Foundation, this dream is now a reality.

Daryl Georger, Ph.D., hospitality management faculty and other faculty of the hospitality department worked together to write a grant with the assistance of Sheila Coon.

“Without the assistance of hospitality faculty and Sheila Coon,” said Georger, “the grant would have been much more difficult to achieve.”

The hospitality department initially asked for $1 million, which has been granted to Mercyhurst in installments annual.

These installments have gone into newer and updated facilities such as new kitchens. The old kitchens, built in 1987, obviously had outdated equipment that has been replaced as a result of this grant. Also, previously the hospitality department took up a third of the café in Mercyhurst’s Center for Academic Excellence.

“Space was limited,” said Georger, “but now the hospitality department has its own space and so does the café.”

The hospitality department is very grateful to Ellsworth Milton Statler, for whom the Statler Foundation is named, for this grant. Stalter built his first hotel in Buffalo in 1907. He is famed to have the first major hotel to have a private bath or shower and running water in every room. After his death, his foundation was erected and became benefactor of Cornell University School of Hotel Administration in Ithaca, N.Y.

Among the things the Statler grant afforded Mercyhurst are $60-65,000 ovens, which allow a wider assortment of breads and other food to be made. These ovens are not only expensive, thus difficult to purchase without the grant, but difficult to use in general.

“Students at Mercyhurst will have an opportunity to use these ovens before they graduate. [This is an opportunity] that few other colleges have,” Georger said.

The hospitality kitchen is now more versatile than ever, boasting a new setup that allows the interchangeability of machines depending on what is needed at a particular time.

Sanitation/dish washing services have been updated with digital interfaces as well as Mercyhurst’s ordering facilities.

“I think the grant has allowed the hospitality department to grow as a major,” said Poweski. “I believe this new facility makes students more enthusiastic to learn and be involved in the major.”

Now the café will be better able to serve students, while at the same time future hospitality graduates can learn on state-of-the-art equipment and earn a better education at the same time.