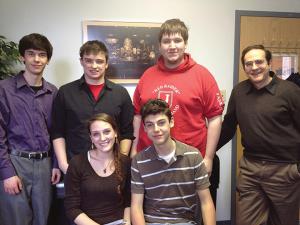 The Mercyhurst Music Department is often known for its displays of student talent throughout the year through the performance of works of music, but what about those students who are on the other side—the ones writing the breathtaking music that musicians perform?

The brilliant minds behind the music will have a chance to showcase their creative spirit at the Composer’s Concert this weekend, Sunday, April 28, at 4:30 p.m. in Walker Recital Hall in the Audrey Hirt Academic Center.

The sense of camaraderie for the whole event is astounding. From a professional string quartet based in Cleveland to Mercyhurst Alumni and even a few of the composers themselves, the concert should prove to be a spectacle to be beheld.

Student composer and sophomore Ian Gayford is having three separate works presented at the concert.

The “Hubble Quartet,” which will be performed by the Thalia Quartet, is comprised of graduates of Cleveland Institute of Music.

The Hubble Quartet will be accompanied by actual images that were taken by the Hubble Telescope.

Another of Gayford’s most exciting works is a collection of motives and pieces for the production of “Eurydice” that was performed two weeks ago at Taylor Little Theatre.

Although this is the Eurydice Suite’s second premiere, this will be the first time the set of works will be performed live for an audience.

“The experience of writing these pieces has really helped me to stretch myself as an artist, giving me further insight into my musical vocabulary.

“Although writing was never really easy, it was certainly worth it and I hope the audience will find the experience as moving as I did,” Gayford said.

Another very exciting piece of music that is being premiered is sophomore Bobby Lucas’s “Quartet for the End of the World,” which was inspired by events that have happened on campus. Due to the water shortage on Jan. 21 and the evacuation of campus, Lucas got enough inspiration to compose three of the four basic themes.

When asked about his work, Lucas said, “The world didn’t end, so I got to finish it, which was cool.”

Junior Luke Allport-Cohoon has composed many works at Mercyhurst, but at this concert he is premiering a work titled “Dueling Trumpets,” which involve two trumpet players who are playing two differing styles of music — jazz and classical.

“I was inspired to write the piece when I heard two trumpet players practicing in D’Angelo at the same time,” Allport-Cohoon said. “One was playing some classical concerto and the other was playing a jazz chart, so I went and wrote a piece that tried to capture those ideas, of classical versus jazz.”

The Composer’s Concert features many more works made possible through the creative spirits of the students of Mercyhurst.

The concert is in the Walker Recital Hall on Sunday, April 28, at 4:30 p.m. The performance is free and open to the public.