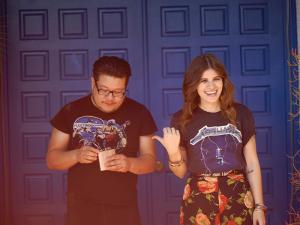 This week we will dive into the surf rock duo Best Coast in a continuing mission to create a soundtrack for the summer.

Best Coast formed in 2009 after Bethany Cosentino and Bobb Bruno kept meeting each other at various shows in Los Angeles.

The band’s two full-length albums really show off Cosentino’s writing style. Her style focuses heavily on feelings of yearning and alienation from the world.

These lyrics fit perfectly within the band’s balmy, surf-rock sound.

Though some of the songs seem very similar and listening to a complete album by them may seem dull and unsatisfying to some, Best Coast still has many great songs that will go great in your playlist.

Did you ever have a feeling that the love of your life is dating the wrong person? Well, “Boyfriend” is the song for you. This relatively short track gets the message of “I wish he was my Boyfriend” across pretty well as Cosentino’s voice swells over fuzzed out guitar tones.

“The Only Place” is much more upbeat and great for a road trip to your favorite place or hangout.

This song discusses living in your favorite place because it has everything you would ever need to be happy.

The last track, “Angsty,” is one of my all time favorites; gone is the balmy sound Best Coast does so well.

Do not worry, though, because it is replaced with heavily reverberated guitar parts that feel radioactive as they decay away. This song almost feels like a song from Heart’s discography.

Surf rock is getting more popular each summer and this summer won’t be any different. So before you leave for that big trip to the beach, grab some of their music, and make whatever sand you land on the Best Coast.