Representatives from Mercyhurst’s campus in Ireland visited Mercyhurst Main on an April 29-30 summit to report back on the campus’ status.

“Students rave about their experience in Ireland,” said Gamble. “That has been a well-developed part of our program in Ireland.” 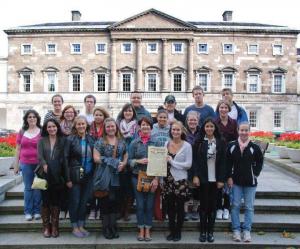 Contributed photo: Students from the 2012-13 fall Ireland trip pose outside of the Irish Parliament.

Jeff Roessner, Ph.D., Dean of Arts and Humanities, concurs, seeing the cultural and travel opportunities as well as the educational opportunities that the Ireland campus has to offer students.

“Not only do students get to immerse themselves in the Irish culture of a local community, including its food, music, and history,” said Roessner, “but they also have the advantage of easy travel around the country and to continental Europe.”

The second area of interest at the summit was the emerging Intelligence Studies program at Mercyhurst.

“Ireland serves as an entrance way into the European intelligence market,” Gamble said, underlining the importance of the intelligence department.

Part of the summit covered expanding the intelligence studies department and also increasing collaboration in other departments at other colleges as well.

For example, there was some discussion about potential opportunities for the archaeology departments at Mercyhurst to collaborate on projects.

Expansion of facilities in the Ireland campus was also a concern, raising an interesting question.

“Currently, we do not have a full time Mercyhurst employee in Ireland keeping an eye on things,” said Gamble. “Do we need one in Ireland? That is a question we will have to answer.”

The third area covered at the summit was developing academic partnerships with other colleges. UCC, as already mentioned, was one of the colleges considered as well as Waterford Institution of Technology.

While the summit focused a large part of its energy on the operations of the Ireland campus to the Board of Trustees, the board also heard testimony from several individuals about their experiences and thoughts about the campus in Ireland. Roessner was one of the testimonial speakers.

Roessner was struck most by the observations he has done of some of his students who were able to travel abroad in Ireland.

“In my creative writing classes, the ones who have traveled repeatedly write about their experiences [traveling aboard]. The students seem genuinely homesick — for Ireland: they all want to return,” said Roessner, “the university has cultivated wonderful friends there, and our welcome is so warm, hospitable, and generous that it is truly humbling. We are lucky to have such a special place to call our second home,” he said.

Gamble believes the board was impressed with what it heard from the Ireland campus, both about developments happening now and those that will happen in the future.

A future ambition that holds promise is the Irish government’s interest in funding a grant to increase Mercyhurst presence in Ireland.

This development, and further expansion on the components talked about at the summit, can only mean good news for both the campus in Ireland and the university in general.