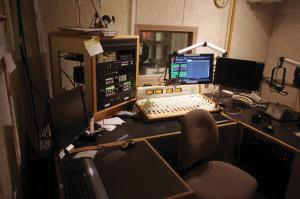 Contributed photo: WMCE offers the opportunity for students and faculty alike to be involved at the radio station located in the basement of Baldwin Hall.

People from around the globe are greatly impressed by the new format of the Mercyhurst University radio station, WMCE 88.5FM and 1530AM.

The Mercyhurst Radio station began in February 1989 and has made large strides throughout the years.

It began as a classic rock station and continued to expand making changes to classical, opera and jazz.

Most recently, under the direction of “Captain” Dan Geary, the station made a change to “Greatest Hits of All Time” in January.

Ever since the switch, the local community, as well its national and global listeners have raved about the new changes and the station as a whole.

WMCE has listeners from all over the globe, including the countries of Ireland, Japan, India, Thailand, etc. Listeners also tune in from around the nation from states such as Idaho, Washington, Michigan, New Jersey and Nevada.

“The response has been phenomenal,” Geary said.

Geary is a 40-year Erie radio veteran, with a wide range of experience.

Although the station moved away from broadcasting jazz via radio, jazz is still offered online 24/7.

Both online and live broadcasts are doing so well that the online listenership has recently passed the 110,000-listener mark.

Past alumni, one in particular from Louisville, Kentucky have written on the WMCE Facebook page to express their praise.

“We pride ourselves that we are local and that Merychurst students can get involved,” Geary said.

For questions, contact Geary at wmce.mercyhurst.edu, dgeary@mercyhurst.edu or via telephone at (814)-824-2294.