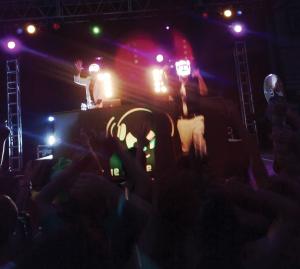 Zach Dorsch photo: White Panda and Super Mash Bros performed at this year’s Springfest event to a sold out crowd.

When MSG announced earlier this year that The White Panda would be headlining Springfest I was beyond ecstatic.

I had heard from several of my Penn State friends that The White Panda put on a high-energy, mind-blowing show, and that I was in for a real treat.

I am happy to say that my friends were so right! Both Super Mash Bros and The White Panda killed it.

From my perspective, it seemed like everyone in the crowd really enjoyed the show and had a blast dancing. This was definitely a big change from last year less then acceptable performance from Mr. Kingston.

I was expecting Super Mash Bros and The White Panda to pull music from there newest studio albums and monthly podcasts.

This was not the case, both sets produced some of the freshest mash- ups I have heard in a long time. They pulled samples from a wide spectrum of genres including Top 40 hits like Fun’s “We Are Young,” big clubHouse hits, and Rock which were blended so seamlessly they sounded like original tracks.

Another aspect I really enjoyed was the lights and projection side. Super Mash Bros’ projections fed heavily off the internet culture, which mixed perfectly with their mashing style. Their total effect reminded me a lot of Pittsburgh producer Girl Talk.

The lighting completed the total package and was done well by both groups.

Finally, I want to thank MSG for selecting these groups to play Springfest and putting money towards the screens and lights. Their contribution really helped to create that EDM atmosphere.