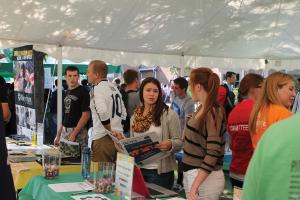 Selina Bowe photo: Students, both old and new, ran and visited booths at this past Friday’s Campus Involvement Fair.

Students at Mercyhurst, both old and new alike, were given the chance to become a part of the many groups and clubs on campus. On Friday, Sept. 6, the Campus Involvement Fair took place outside of the Student Union.

This was the first year the Campus Involvement Fair took place on the first Friday of the year. In years past, the fair usually occurred after the first few weeks of the academic school year. According to Leadership and Outreach Coordinator Kristy Jamison, this change was made so that incoming students could be involved in the various RSCOs from the very beginning of the year. She said it was also made so that RSCOs could start the year off right, allow for a longer programming period, and so students could create some early connections.

The goal of the fair is to get students connected to the campus community outside of the classroom setting. It is also used as a way for students to meet others with similar interests and show off the vibrant student life on campus, according to Jamison.

In addition to the many student clubs and organizations being represented at the Campus Involvement Fair, non-profit local services from all around the Erie area had booths representing themselves at the fair.

The Campus Involvement Center believes that the Campus Involvement Fair went very well. Jamison says that a good majority of the RSCOs representing themselves at the fair were able to get a good number of potential new members for their individual clubs and organizations.

“The good weather we got that day really seemed to help a lot too,” Jamison said .

If you would like to know more about the many RSCOs on campus, please visit the Campus Involvement Center located on the top floor of the Student Union. You may also contact Kristy Jamison at (814)-824-2388 or kjamison@mercyhurst.edu and Sarah Allen at (814)-824-2089 or sallen@mercyhurst.edu.