After a tough loss to open the football season against Bentley the first week of the season, it is difficult for a team to come back with confidence to its home opener.
Even so, the football team did just that and more with a crushing 49-7 victory over Millersville Sept. 14.

“It’s always nice to already have a game under our belt going into our home opener,” Head coach Marty Schaetzle said. When talking about the differences between the Bentley and Millersville games, “our guys have been stepping up and playing better as a team.”

With both teams coming in with an 0-1 record, it was anybody’s game. Mercyhurst’s running back Brandon Brown-Dukes set the bar high with a 66-yard touchdown run on the first play against Millersville and continued doing so with 142 yards and two more touchdowns.

Junior Colin Kimball set a school record for most interception return yards in a single game with 86 yards.

Kimball was named PSAC defensive player of the week because of his performance during the Millersville game. 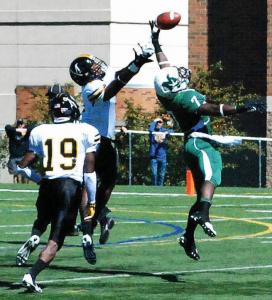 Jake Lowy photo: Vladmir Rock catches a pass during the game agianst Millersville this past Saturday, Sept. 14.Kimball, the starting free safety for the Lakers, had two interceptions, including a 45-yard touchdown return in the third quarter, helping to lead the Lakers to victory. Kimball also had five tackles in the victory, four of which were solo stops.

Schaetzle is excited about the upcoming season but says he wants to “take it one week at a time.”

“I’m excited about the October game at Veterans Stadium against Gannon because it is fundraising for such a good cause,” said Schaetzle.

One dollar from every ticket sold for the Oct. 17 game will be donated to the ALS Association.

The Lakers are looking to keep up the momentum as they travel to Clarion this upcoming weekend on Saturday Sept. 21 to take on the Golden Eagles.