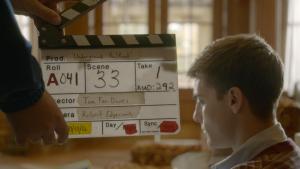 TheUndergroundRailroadfilm photo: “The Underground Railroad” is filming in local Erie locations through the end of this month for the release that is set for 2014.

Who says that all major motion pictures have to be made in New York City or Hollywood? Erie, Pa. is getting the film treatment with the adventure comedy-drama film “The Underground Railroad” being released in 2014.

The film is comprised of up-and-coming stars as well as the writing/directing debut for Tom Fox Davies, who composed the music for the film “Homecoming” back in 2011 and has acted in smaller projects such as “Sisters Grimm” and “Photo Shoot” in 2009.

The film, produced by Grant Larson Productions, is shooting in Erie until Sept. 28 and has employed the assistance of the Erie Police Department for patrol cars and officers.

Principal photography was completed on Oct. 25, 2012, and the beautiful Mercyhurst campus was used for some scenes as well as State Street on Oct. 8.

The official IMDB (Internet Movie Database) page for the film went up on Dec. 14, 2012. It provides the first-billed cast members, plot description and director of the film.

The film also has an official Facebook page (The Underground Railroad) with recent posts, which joined Facebook on Aug. 30, 2012.