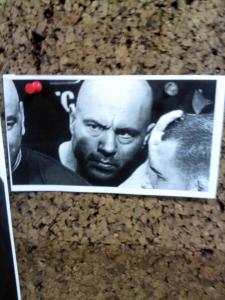 Ryan Kushner photo: This face has been randomly appearing across campus.

If you have been to the second floor of Zurn lately, there’s a good chance you may have noticed a small picture of a rather perturbed looking bald man tacked on to the cork boards.

No explanation of the face is provided. Its interpretation appears to be up to the passerby.

His beedy eyes could convey anger; however, they could also be saying “you can do this” to students as they approach their first examinations of the school year.

Whatever the purpose, the bald man takes on the meaning you assign him as he peeks over the Recycling flyers of the second floor of Zurn.