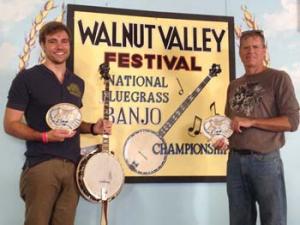 Mercyhurst senior Gregg Robbins-Welty, and his father, Eric Welty, made history at the Walnut Valley Festival National Bluegrass Banjo Contest by becoming the first father and son to both make it into the top five as they tied for fourth place. They competed against each other.

The festival, held in Winfield, Kan., contained “not only the National Banjo Contest,” Robbins-Welty explained, but also held the National Guitar and National Mandolin Championships. The festival also featured the International Finger-Style Guitar Contest where musicians from places such as “Australia and Japan and China come to Winfield, Kansas to play.”

Robbins-Welty, a bio-chemistry major at Mercyhurst, only started playing the banjo about five years ago. “My dad won this contest [Walnut Valley Festival] on the banjo in 1993,” said Robbins-Welty. “And so I had always grown up listening to him play…but I’ve been very motivated that, if he could do it, I could do it.”

Regarding his favorite pieces to play on the banjo, Robbins-Welty says it is a strategic choice. “My dad’s success has been playing old jazz songs like ‘Sweet Georgia Brown’ and tunes like that. My success has been taking slow songs and playing them in weird tunings of the banjo and doing something different with them.”

“But when I’m jamming with friends,” he says, “that’s when you’ll hear me play [more traditional songs] like ‘Dear Old Dixie.’”

The judging for national contests is not taken lightly. “It’s blind judging,” said Robbins-Welty, “so the judges sit offsite somewhere in a van with headphones on and they can only hear your microphone.”

He says the intimidating environment of the contest. “When you get up there [on stage], you could forget your own name let alone what song you’ve been practicing for a year.”
Robbins-Welty says that that might also be the reason he enjoys participating in these types of competitions.

“It’s like a challenge; it’s like I’m fighting myself. It’s not really a contest of ‘am I better than you?’ I mean, it is, to an extent. But it’s also ‘I need to play as good as I can play,’ and then just leave it up to the judges to make the decision.”

When asked what advice he had to offer to aspiring musicians, Robbins-Welty did not hesitate.

“There is nothing that will make you get better faster than playing with someone that is better than you. I learned that really quickly because when I started going to contests, I was bad,” Robbins-Welty said.

Robbins-Welty hales from Mayville, N.Y.. He plans to continue competing and learning with the best.