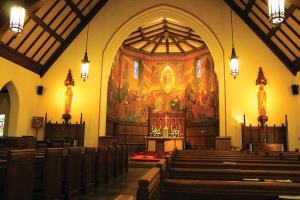 Mike Murphy photo: At one recent morning Mass, only two people were in attendance.

There have been some questions as of late as to the current Catholic status of Mercyhurst University. Mainly, is Mercyhurst Catholic enough? For many, the low attendance at daily 8 a.m. Mass speaks as an answer to the negative.

Sister Patricia Whalen, Mercyhurst’s registrar says, however, that the answer to this looming question is “not a yes or a no.”

She points to the very first line of the school’s mission statement in order to first quell the speculation, which states: “Consistent with its Catholic identity and Mercy heritage, Mercyhurst University educates women and men in a culture where faith and reason flourish together…”

“The founding Sisters left us a sacred trust,” she said, “to keep the faith, deepen and grow” while “integrating faith and reason…spirituality and scholarship.”

Whalen says that Mercyhurst has stayed faithful to this tradition by having religious studies, as well as service hours implemented into its core, having a chapel that is available and accessible, and most recently, by introducing a Catholic Studies minor to the school.

All of these efforts provide “the framework and principles on serious questions of life,” Whalen said.

Whalen maintains, however, that the argument is one that remains at “both ends.”

“We can’t impose our spirituality onto others,” she said, noting that to do so would go against the very Catholic principles of free will and respect for other religions and beliefs.
Instead, Mercyhurst’s Catholic identity should be “a respectful offering,” with courses that “provide the framework for reflecting on life” to students.

Whalen went on to say that she believes Mercyhust has made sincere efforts to promote this tradition to faculty and students alike, and to “keep faith with this mission” and continue on with the “great adventure of life that’s happened here [at Mercyhurst].”

Regarding the benefits of participating in daily Catholic Mass, Whalen said that for her, it is “an opportunity to pray, listen to the Scripture, hear a good homily… and to be strengthened by the Body and Blood of Christ.”

Whalen also said about the school’s promotion of the Catholic faith, “Can we do more? Of course.” But if we continue working together and “taking the best of our past teaching and applying it to modern day community,” Mercyhurst will remain a fully Catholic institution focused on the founding sisters’ faith and principles of service, respect and freedom that are “so rich and ever-new.”