This past Friday, the Mercyhurst men’s lacrosse team had another strong turnout with many alumni coming back to scrimmage against the current players, in what is becoming a strong tradition within the past decade.

The weekend kicked off with a meet-and-greet and tailgate at Tullio Field, followed by the intrasquad scrimmage, in which the current Lakers beat out the alumni who traveled to play. 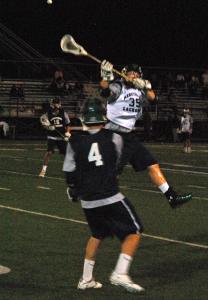 Jake Lowy photo: The Mercyhurst men’s lacrosse team continued a decade-long tradition with an alumni intrasquad game this past Friday.

When asked why he thinks so many alumni continue to come back, Coach Chris Ryan said, “Well for one it’s really just a fun time. I also think that the alumni and fans are just invested in the program. It’s tradition and we just have a lot of great things happening the whole week for the alumni, current players, and their families.”

Losing a total of nine key players and roughly 150 offensive points between them, the Lakers are looking to have yet another exceptionally successful year with their program.

Gaining 16 freshmen and one new transfer, the Lakers are enjoying their fall season and conditioning and looking forward to the tough match-ups of the upcoming spring season.

“We’re just taking it slow. The goal of the fall season is to, first off, have the players hit everything academically, and to become collegiate lacrosse players and a sound team, and then taking on the physical conditioning as well,” Ryan said.

Ending their season with a record of 18-1, and making it all the way to the national championship in Philadelphia, Pa., on May 26, 2013, the Lakers are looking to seek redemption for the 10-11 loss against Le Moyne College.

When asked how the team is doing so far, Coach Ryan said, “Every team has a different personality. With 16 seniors and 17 freshmen and two smaller classes in the middle, there is a different team dynamic.”

“A lot of upper classmen take the new additions under their wing and we do a lot of team bonding as well. So the freshmen get a chance to learn, grow and absorb how intense the collegiate level can be.”

“The story for this year is still to be written for us. We are tackling this season the same points that we always try to focus on each year: hard work and accountability.”
“I am very much looking forward to what our spring season has to offer,” Ryan said.

The Lakers begin their 2014 spring season with a scrimmage against Division I University of Delaware in Newark, Del. on Jan. 18, 2014.