Griffin has been a great asset for the Lakers the past few weeks with his second top five finish of the season already. The Harry F. Anderson Invitational also marked the third consecutive week he finished first for the men.

“This is my last year of cross country, so I’m really just trying to enjoy every minute of it,” Griffin said.

When asked about his attitude before these races, he said, “This season I am really trying to stay out of my own head. My best races are when I do not worry about what other teams are there or what place I need to finish. At the end of the day I just want to run well for my teammates and know I gave it everything I had.”

This was the third year in a row that Griffin finished in the top five at Roberts Wesleyan, which is another great achievement.

“I have worked really hard over the last four years to get to where I am athletically. I do not have as much natural ability as other runners, so I often have to go above what is asked of me to get the same results. The mileage I do in the summer goes a long way to prepare for the season,” Griffin said. 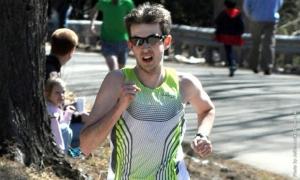 The senior also gives much credit to his support system and those who push the team’s ability as well. “…but the most beneficial thing is my teammates. We have a great team with a really strong work ethic. We are all where we are because we push each other to get better during every practice,” Griffin said.

His work ethic has been able to see great opportunities for success available and also conquer the challenges ahead. “Nothing feels better than when you run a great race. It’s the validation that all the hard work you put in has paid off.”

Griffin is happy with the season so far but now looks to his future goals with the rest of the team. “I am happy that I have had a couple good races this year, but I know that I still have a lot of work to do. I am going to use my success so far this season as momentum toward having strong finishes at conference and regionals.”

Other runners for Mercyhurst are finishing in the top ten lately and finding their way to the top of the group.

“The team is the strongest one that we have had in the last four years and maybe even the best ever at Mercyhurst,” he said which is backed up by numbers and results.
“We finished 8th at the National Catholic Invitational and 3rd at Roberts Wesleyan. We have beat many teams for the first time in the four years I have been on the team.”

We are a really hard working, dedicated group and I think it will show at conference this year. The goal is to finish in the top six and I really think we can do it.”

This group seems like a well-rounded team and one to keep an eye out for the remainder of the season.