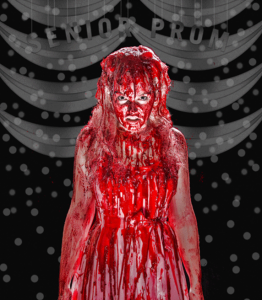 It’s prom night at the Erie Playhouse! Opening the second show of the Playhouse’s 97th season is Carrie: The Musical. Based on the bestselling novel by Stephen King, you are certain to get “carried” away by this performance.

In the small town of Chamberlain, Maine, Carrie White is the outcast, bullied by not only her peers, but also her overprotective mother. It’s then that Carrie discovers her special power, and, if pushed too far, she is not afraid to use it.

The cast is amazingly talented, including 13 young performers playing the students in high school, and they range in age from 14 to 23. A lot of them are veterans for the Erie Playhouse’s Youtheatre program.

Playing the role of Carrie White is 15-year-old Emily Tworek. Tworek is currently a sophomore at General McLane High School in Edinboro PA, and has been working with the playhouse for over two years.

Her previous performances with the Erie Playhouse’s Youtheater program include Godspell (Peggy), The Little Mermaid (Atina), Alice in Wonderland (Ensemble), Camp Rock (Ensemble), Beauty and the Beast (Belle), and Guys and Dolls (Sarah).

In a recent interview, Tworek was asked if and how she connects with the role of Carrie White.

Emily is quoted with saying, “Yes. I definitely can connect with Carrie,” Tworek said. “I’ve always felt like the outcast in a crowd because of my love of theater and the arts. In the musical, Carrie always has an undying optimism for everything, and I try to live my life like that.”

Tworek would also like to add that playing Carrie White has by far been her favorite role because it is complex and challenging in both a vocal and theatrical aspect.
Rehearsals for Tworek have been nothing but a good time, all the while keeping a strong work ethic to be able to perform her best throughout the run.

“The Erie Playhouse is an incredible, supportive family. We all know what it takes to make this work, which makes it a great experience for everyone.”

Starring alongside Tworek is 17-year-old Blake Bojewski, who plays the role of Tommy Ross.

Bojewski is currently a senior at Fairview High School in Erie Pa. He has been volunteering his talents with the Erie Playhouse since December of 2012, and has previously been seen in The Sound of Music (Rolf), and Grease (Doody). Like Tworek, Blake also connects to Tommy’s character because of his open-mindedness.

Although Bojewski does not consider himself a jock like Tommy, they both have an aspiration to write and the same devotion when it comes to relationships.

Bojewski says that relationships like the ones Tommy builds in the show require a certain aspect of honesty and cooperation.

While Tommy cares for Carrie, Bojewski would like to add that he loves his cat Sophie, and cares for her very much.

Bojewski enjoys playing this role because he views Tommy as a “real” character, meaning that Tommy is just another human being who is choosing which direction to go in life.
Even though Tommy does not have everything figured out, he works hard towards a goal of making himself a better person, much like Bojewski himself.

When asked about what types of costumes the character Tommy wears on stage, Bojewski responded “Exactly this! (Pointing to a regular shirt and jeans that he had worn to school that day). All of the costumes I wear on stage would normally come from my everyday wardrobe: comfortable and fun!”

Both Tworek and Bojewski agree that director Richard Davis and musical director Andrew Rainbow are incredible people to work with.

Both strive for perfection one-hundred percent of the time, and while directing the acting and vocals, they always allow room for the performers to add independence and their own formation of the character they play.

Producing director Richard Davis started volunteering at the playhouse 34 years ago, and 2014 will mark his 25th year as a staff member.

He acted as the costume designer for 15 of those years, and the producing director for the last nine years. “One of the great pleasures of what I do is watching the young performers who grow up at the Playhouse then move on to our mainstage,” Davis said. “I have also seen a number of Youtheatre alumni who then move on to professional careers in theatre.”

Carrie is a very challenging musical to direct. First, it has a lot of technical aspects that you have to address; levitating objects and making chairs move and fly.

There is a lot of stage combat and that has to be choreographed in a way that the actors do not get hurt; and of course creating the huge destruction scene.
You have to find a theatrical way to make the blood and destruction happen, but because of microphones and safety, you can’t drop a huge bucket of blood on stage every night.

We have had to come up with a way to make it work that the audience will buy. Carrie is also very challenging from an emotional standpoint, so you have to get the actors to go to a very dark place in their minds every night.

It is fun, and you get to work with your friends in putting together a wonderful piece of entertainment for the community.

If you ask anyone who has moved away, they will always tell you that there is no place like the Playhouse.”

Ticket prices can be found at www.erieplayhouse.org as well as other information on the show and other upcoming events.

On Oct. 18 and 19, students can save $2 off the regular price of a student ticket if they wear formal prom wear to the musical.

Students must show a current high school or college student ID. (One ticket per ID. Walk-in sales only. Not applicable to adult ticket sales).

The Erie Playhouse Wing will have the following items on sale during the show: ‘Eerie’ Playhouse Tee Shirts ($15), On-site Prom Pictures ($3), Candy grams to your favorite cast members ($1) and a prom raffle basket filled with gift certificates for a limousine ride, hair design, flowers, restaurants and more. (Adult Situations and Language).