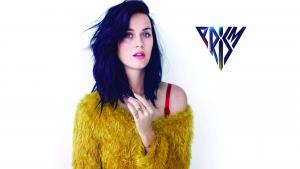 Katy Perry is back at it with her junior album “PRISM,” an hour-long claim to be nothing like what her “Teenage Dream” looked like. From the previews for her “Roar” music video where she’s seen burning her “California Girls” wig to songs that are more experimental and less pop, Katy’s certainly stepping out of her shell with this one.

The album starts out with “Roar,” its lead single. Her inner tigress runs weak and turns into a bore with the repetitive anthem structure of yet another motivational song.

Where Perry shines with her choruses and vocal power, she loses in the prevalent single that serves as an anthem for the masses. “Firework” was enough, but “PRISM” falls victim to this abuse in more than one instance; first with “Roar” and later in the album with “International Smile” and “This is How We Do,” the latter being the only one that could actually be single potential without being redundant.

Perry’s experimental effort is reflected the loudest on her musical arrangements, having worked with a variety of producers to come up with a variety of different sounds that beautifully blend throughout the duration of the album.

From the peaceful ballad of “By the Grace of God” to the ’80s feel of “Walking on Air,” Katy Perry is ready to show the masses every color in the spectrum.

Although Perry is known for being a queen of pop, her strongest songs this time around are the most separated from it.

The first of these potential hits is “Dark Horse” featuring rapper Juicy J, a luring symphony to a mystical love set against a background reminiscent of the upcoming trend of “trap music,” which features slowed down dubstep samples and heavy bass.

Between the daunting sound and vocals that are better situated at a club than a toddler’s birthday party, it is without doubt the album’s best song in terms of production and execution, making it an obvious choice for a possible single.

“Legendary Lovers” is also a standout, following in the production steps of “Dark Horse” with a more vulnerable tone. Perry shines through her sped-up bridges, dropping her bars in true rap fashion, and continues to dazzle through the chorus of the song, begging her lover to say her name “like a scripture.”

The last of these tracks is “By the Grace of God,” by far the most vulnerable song on the record and a perfect choice to close the standard version. In the slow ballad, Perry talks about picking herself up from a dark place and continuing to walk.

Without trying, she provides the most inspirational song in the album, which only goes to say her best efforts are those where she tries the least.

Her voice is magnificent and her notes are on point, giving the song a power otherwise unattainable.

“PRISM” is a breath of fresh air for those left with a sour taste after the re-release of “Teenage Dream,” but certainly a step down from her previous work.