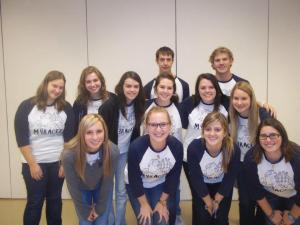 Contributed photo: The MYRACLE club at a retreat in Grove City.

The full title of the club is Mercyhurst Youth Retreats and Catholic Leadership Education (MYRACLE).

The main thing the club does is attend retreats and service projects. The retreats are usually done whenever it is the most convenient time for the students. This is usually at the end of the school week.

The club was started back in 2011. It was created in order for students to share their faith with school-aged students.

As of now, there are more than 30 members in the club. Most of them are actively involved; however, some of them are not as involved due to time or other obligations.
MYRACLE has been to four states. They have also been to six or seven dioceses, and have reached out to 1,400 students in grade school.

The main goal of each retreat is to help children learn more about God’s message and deepen their faith. Ice-breakers are a big part of the retreats. At the end of each retreat, a survey is given out to the children to ask them how much they enjoyed the retreat.

“A big part is getting kids to learn who they are and if they want to live as a ‘disciple of the Lord’,” senior member Kevin Dudek said.

The club has also donated goods and other items to Lakers for Life and local homeless shelters in the Erie area. During Lent, the club has performed the Living Stations in the Erie diocese.