The Mercyhurst men’s basketball team was voted to finish sixth in the Pennsylvania State Athletic Conference Western Division for the 2013-14 season.

These rankings are based on their division’s preseason coaches poll. Last season the men finished fifth in the division after earning 16 wins.

This is a middle ranking and the Lakers look to prove they’re worthy of a higher seed.

“We expect to finish higher than sixth and to show everyone how good we are. Our goal is to win a PSAC Championship,” said senior center Paul Bildo. The expectations for the winter are to surpass last year’s and continuing the winning record. 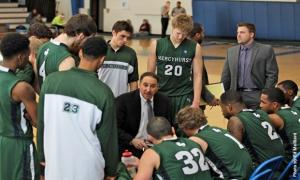 Ed Mailliard photo: The men’s basketball team was voted to finish sixth in the Pennsylvania State Athletic Conference Western Division for the 2013-2014 season.After winning strong in the Western Division last year, Indiana (Pa.) was voted to finish first while rival, Gannon, received the second slot. Another tough competitor, Slippery Rock takes third. California (Pa.) ranked fourth and right ahead of Mercyhurst in the fifth place ranking is Pitt-Johnstown who will make their PSAC debut.

Luckily, the Lakers this season are full of veterans and have experience to back up their goals of moving ahead in the rankings. There is just one freshman on the team, Hian Hale, along with five other newcomers who seem to be fitting right in with the rest of the team.

The practices leading up to this point already have been able to form a solid preseason training regimen. Bildo said, “In practice we are just playing hard, learning the system, and building chemistry so that we play well together.”

Last season, the Lakers made big waves by winning huge games against two nationally-ranked opponents. Also Jonathan Ouegnin made the infamous dunk that got him a clip on nationally-televised “Sports Center.”

Ouegnin is back this year as a senior and ranked in the top five in three PSAC statistical categories including assists, steals, and assist-to-turnover ratio.

This leaves a lot of excitement for the first league opening game Nov. 15 against Shepherd University. Be sure to come to the MAC and support them for their home opener Nov. 20 vs. Seton Hill University.