Football has strong wins against Edinboro and California of Pennsylvania

With another successful win of 23-20 against California University of Pennsylvania on Nov. 9, it has given the Lakers a 6-4 season.

The Lakers did not produce their best offense game in the season but they were able to gain 266 yards on the ground against the Edinboro defense. Mercyhurst quarterbacks completed just seven of 16 passes, the second straight game Mercyhurst has not thrown for at least 100 yards. 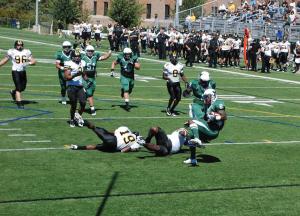 Laker defense performed exceptionally well by only allowing Edinoboro a season low of 148 total offensive yards. With much difficulty, Edinboro could only generate 51 rushing yards on a total of 38 carries and just 97 passing yards.

A relentless Laker defense sacked Edinboro quarterback a total five times and had eight tackles behind the line of scrimmage. Dustin Galich, who was one of the 21 seniors honored, led the defense with 11 tackles, twosacks, two tackles for a loss. His performance helped him earn the Eastern Collegiate Athletic Conference (ECAC) Division II Defensive Player of the Week.

Redshirt sophomore Brandon Brown-Dukes finished the game prior to halftime after rushing for 67 yards on 10 carries, resulting in a 2,248 career rushing yards surpassing Mercyhurst Hall of Fame running back Tim Ruth (1982-85).

Early in the game, the Lakers got on the scoreboard first after a poor snap by the Fighting Scotts resulting in a Mercyhurst safety.

The Lakers scored again, five minutes into the second quarter, when red-shirted sophomore Richie Sanders found a seam in the Edinboro defense and ran an 80-yard touchdown. Wakefield followed for another field goal, 16-0.

The win helped junior defensive back Colin Kimball and sophomore tight end John Matarazzo earn the Capital One CoSIDA Academic All-District First. The duo will now be eligible for Capital One Academic All-America status, with voting scheduled to begin on Tuesday, Nov. 12.

The Lakers look forward to their next game against East Stroudsburg University on Saturday Nov. 16.