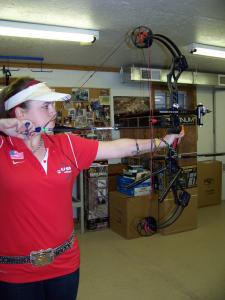 Caitlyn Merkel photo: Freshman KayLeigh Rogers entered the National Field Archery Association competition and won. She is one of the youngest archers to win this competition.

KayLeigh Rogers has an incredible talent which is alternately inspiring and terrifying: She is a world-class archer who has won national competitions and competed internationally with professional archers. And she’s only 19 years old.

The young prodigy from Texas has competed across the globe in compound and freestyle archery competitions, showcasing her talent and winning her notoriety in archery circles.
KayLeigh is a freshman at Mercyhurst who started shooting when she was 12.

“I had just left six years of soccer and my mom told me that I had to find a new sport,” she said in a recent interview.

After bouncing around from sport to sport, a list including football and endurance horseback riding, she took a field trip one day to Gander Mountain down in Texas where she lives. It was there that she had her “ah-ha!” moment and fell in love with archery.

First time shooting, she robin-hooded an arrow, or shot one arrow through the back of another. And although it was a defining moment for her, she tries not to repeat it.
“My arrows cost me $35 a piece, so I’d prefer to not spend $70 to show off,” she said.

Since that moment, she has gone on a journey which has taken her around the globe. From winning national competitions in the United States and Canada to shooting above her age class at the World Fields Competition in Belgium at the age of 16 and then at the same competition in France at 18, KayLeigh has a number of stories to share about her experiences.
One such story is when she went to the National Field Archery Association competition for the first time, shooting in the adult category, and she won.

When asked about the competition, she described her multiple round shootout with another girl who was also one of the youngest competitors at the event. After multiple rounds, during which KayLeigh and her opponent tied each time, the match went to sudden death. The targets decreased in size until Kayleigh broke the final target and won the competition. It was a day she’ll remember forever.

Despite KayLeigh’s talent with a bow, she will never be able to shoot in Olympics due to the rules of the Games.

“You can only shoot a recurve bow in the Olympics and I shoot a compound bow. But I hear they’re fighting the rule, so maybe in the future I’ll be able to compete,” she said.
In the meantime, she is content to push her skills as far as she can within the events available to her.

KayLeigh is also looking to start an archery club on campus to give students a chance to experience and she is looking for an advisor to help with this project. Any faculty who have experience with the sport or who are willing to help her with this project are welcome to speak with her.