Men’s wrestling off to a strong start

As predicted the Mercyhurst wrestling team has gotten off to a comfortable start by increasing its undefeated record so far to 4-0.

In the men’s last dual match on Saturday, Nov. 23, the team surpassed Wheeling Jesuit and Ohio Valley. The first match was won, 41-3, and the second match, 42-3.

Even though fans and other teams expected the Lakers to do well this season, the team has taken it upon itself to continue the tradition of hard work and earning success by what it does in practice.

“We came in with a goal in mind this year: knowing our team had the potential to be really good, but needed to put in the time and work in order to do that. So far we’ve been doing everything we need through practices, extra workouts, and just good team focus in order to start out 4-0,” said redshirt sophomore Kody Young. 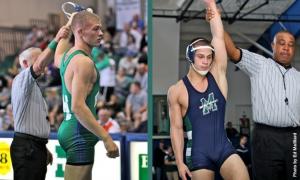 Ed Mailliard photo: Mercyhurst men’s wrestling has gotten off to a comfortable start by increasing their undefeated record to 4-0.

Young contributed to the win with a pin at 133 pounds. Among him were a great deal of other wins from freshmen, juniors and seniors as well.

So far, the Lakers have yet to allow their opponents to gain a combined total greater than 10 in all four dual matches they have faced.

“In our wins we’ve been getting a lot of bonus points which always makes it easier to come away with a team win. And we’ve just been starting out with wins at the lighter weights and not letting up as we go through all the weight classes,” Young said.

Young added, “Mentally we just need to continue keeping the same focus and going out there against each team knowing they’re no different than the teams we’ve already beat. Physically we’ll continue to work hard in the practice room and stay healthy to keep winning.”

The Lakers’ next match will be their PSAC Championship on Saturday, Dec. 7, in Edinboro.