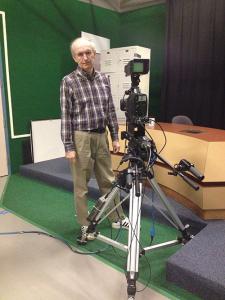 Shuishan Hu photo: Dennis Lebec will be retiring after a decade of teaching in the communication department at Mercyhurst University.

The Mercyhurst community is losing a revered professor of communication this year.

Dennis Lebec, who has taught in the Communication Department for a decade, will be retiring at the end of the academic calendar.

Although Lebec has spent the last 22 years in academia, he started his career in television production.

For nearly 16 years, Lebec worked as both a director and a producer for a local TV station.

With many years of involvement in and contribution to the TV production industry, Lebec was not only able to bring practical, first-hand experience into his classroom lectures, but also to Mercyhurst’s chapter of National Broadcasting Society. As adviser of NBS, Lebec traveled to national and regional conventions with students who possess an interest in telecommunications.

When Lebec was not teaching or assisting students in becoming linked to the world through the NBS, he could also be found working with students annually on department films.

Lebec’s interests are not limited to production and broadcasting. Upon retirement, Lebec plans on dedicating more time on the green, where he says he would like to “shave some strokes off my scores.”

Lebec would also like to travel, read literature, and write after his retirement.

Lebec was allowed the opportunity to do some teaching during his graduate schooling, and since then teaching has never been out of the question for him.

Prior to Mercyhurst, Lebec taught at two other universities, yet he describes Mercyhurst as being his “most satisfying” experience in academia.

As for communication majors, the fondness is reciprocated. Many students said that Lebec will be “a hard one to beat,” but are grateful for all that he has taught them, and all of the extra hours that he has dedicated to the department over the years.

The Mecyhurst community will certainly feel the effects of Lebec’s absence, but as the cliché goes, “where one door closes, another one opens.