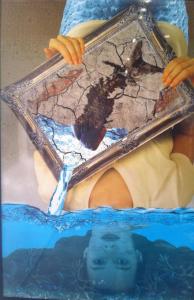 Cummings Art Gallery is known in the area for showcasing some of the best artwork in the area — the Juried Student Art Show is no different.

Joanne Ivey, director of the Stonewall Gallery, acted as guest juror for the show, choosing a total of 59 works to be shown in the exhibit.

The unique drawing was made completely of quotes from the rap artist. Sophomore Jake Lowy earned second prize for his photo set “Sight of the Wild,” which featured photos of wildlife taken at Cleveland’s Metroparks Zoo and in the Florida wetlands. Lowy’s photos seem to capture the essence of each animal he photographed.

Last, but certainly not least, third prize was awarded to Kimberlyn Bloise for “Horsehair Raku Bowl #11,” a ceramic work.

On top of these three top prizes, Ivey also chose three student works that earned honorable mentions including sophomore Kayleigh Ferguson’s “Symphony No. 3,” sophomore Megan Steele for “Skyline Collage” and senior Shelby Yukevich for “Employees Only,” which was just one installment of a three part series on decay.