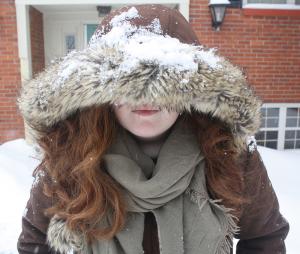 Ashley Favata photo: Katie McCafferty covers her face to protect it from the cold wind blowing around and the snow falling down on campus.

Even though there is enough snow outside to confuse Erie with Antarctica, the Merciad would like to remind all students that life does go on during the winter. Just because it’s hard to get out there, doesn’t mean that people don’t.

The winter weather offers some unique advantages, like a frozen lake on which to have fun, as students like Michelle Ahrens, sophomore and Erie native, do.

“The bay’s frozen more solid than I’ve ever seen,” Ahrens said. “It’s incredible. I walked from Waterworks to Dobbins Landing a couple days ago. When else do you get to do that?”

Not often, and maybe for not much longer.

There are some disadvantages, however, as this writer learned from Ahrens, who is also an avid runner.

Her sport was somewhat sidelined during the cold weeks we had in the middle of January. She developed a rule: “If the wind chills are in the double negatives, then running is not an option. However, if it gets to the single digits and above, then I’ll consider it.”

But looking beyond the campus, the issue of how the homeless of Erie deal with the cold comes to mind.

The answer can be found within the churches and other organizations in the community. Several churches, including the St. Joseph’s Bread of Life Catholic Church and The Church of the Nativity (Russian Orthodox), open their doors to the homeless as part of a program called Our Neighbor’s Place which takes place in Erie every winter.

The churches act as overflow shelters to accommodate those who can’t find a room at the typical shelters for the night. The churches are always looking for volunteers to help staff the shelters, and for the present, the shelter is at The Church of the Nativity, and the pastor of that church is Fr. Pimen Simon of the World Languages and Cultures Department. 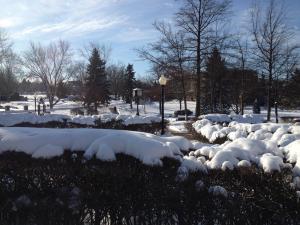 Casey Bleuel photo: Garvey Park gets covered during a massive snowfall that took place on campus. 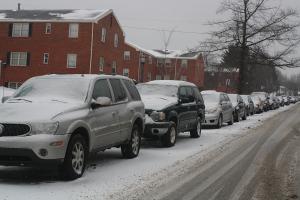 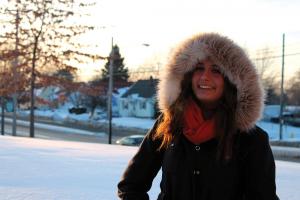 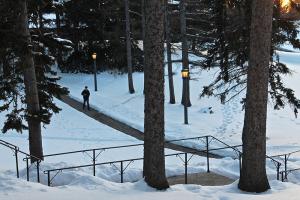 Salina Bowe photo: The grotto next to the Student Union gets covered during the massive snowfall. 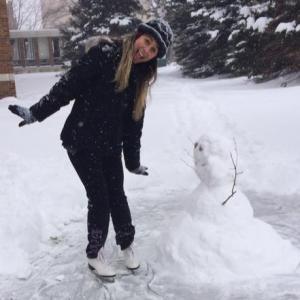 Taylor Bookmiller photo: Danielle Silva dances around a snowman she made on a homemade ice rink outside of Baldwin.